Stopping Industrial Pollution in the Bay

Twenty-one Bay Area industrial facilities used to contaminate San Francisco Bay every time it rained. But this year, during the record rains, these sites didn’t pollute the Bay, thanks to Baykeeper and our Bay-Safe Industry Campaign.

The types of industrial facilities that cleaned up their sites under our campaign include auto dismantlers, ship repair yards, manufacturers of concrete and machine parts, and companies that recycle metals, electronics and demolition waste. All had outdoor areas where pollution accumulated, including heavy metals, oil and toxic chemicals. Rain washed those contaminants directly and indirectly into San Francisco Bay. 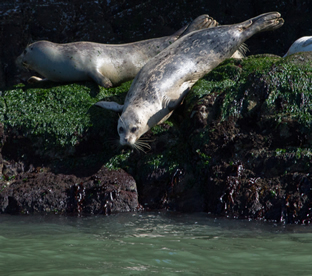 Industrial pollution can harm the Bay’s salmon and other fish. It also harms birds and seals who eat the fish, and people who spend time on or near the water.

How did Baykeeper stop pollution from 21 industrial facilities? First, we investigated, documented contamination from each site and reviewed the companies’ own pollution monitoring reports. Next, we notified the companies of their pollution problems and gave local water agencies a heads up too. If agencies failed to take action and facilities did not quickly cooperate, we sued the companies under the federal Clean Water Act. Then we worked as collaboratively as possible with staff at each facility to make a plan for the most cost-effective and efficient pollution controls. Many of the companies were eager for our advice to stop polluting the Bay, and committed to making improvements in a binding agreement. We continue to check up on these 21 facilities to make sure they stick to those agreements. If problems develop, our scientists work with the facilities to help them get back on track.

Seventeen more industrial facilities are working with us to improve their operations to protect the Bay. And Baykeeper is ready to stop more industrial pollution. But unexpectedly, our Bay-Safe Industry Campaign—which was successful by all accounts—is under attack from Washington D.C.

A bill under consideration in Congress would weaken the Clean Water Act by making it harder for environmental groups to hold industrial polluters accountable. Under this bill, H.R. 1179, a small nonprofit organization that stands up to protect public health and safety against a large polluting corporation could face financial ruin. Organizations like Baykeeper across the U.S. have used Clean Water Act lawsuits thousands of times to stop dangerous water pollution. The goal of this legislation is to intimidate us all into quitting, so polluters can freely ignore clean water protections.

In a separate move, President Trump issued an executive order that weakens federal Clean Water Act protections for many of the nation’s wetlands and creeks. And the administration’s proposed budget will undermine the Environmental Protection Agency’s ability to stop pollution.

In the face of these attacks, Baykeeper is standing up for the Bay. We’re part of the Waterkeeper Alliance, an association of water protectors who work nationwide to stop water pollution in their communities. Together, we’re fighting to prevent passage of destructive federal legislation that would lead to more water pollution. We’re fighting for San Francisco Bay and the Bay’s wetlands using California’s strong environmental laws. And we’re strengthening our legal action so we’re ready to take on scofflaw polluting companies.