Clean up the Bay's Toxic Sites 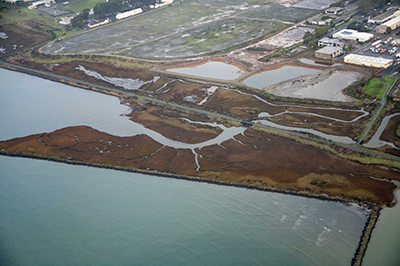 There are thousands of toxic sites across California—and many of them pose a direct threat to public health and the environment. More than a thousand of those toxic hotspots are right here along the Bay shoreline. Pollution from these sites contaminates the soil and water in many frontline communities, which face the additional risk of flooding from rising sea levels.

If we don’t act soon, flooding from surface water and groundwater will spread hazardous chemicals throughout the Bay and Bay Area neighborhoods.

But for decades the agency tasked with protecting Californians and the environment from toxic pollution has failed to take sufficient action. The California Department of Toxic Substances Control (DTSC) has repeatedly fallen short of cleaning up hazardous waste sites to adequate standards, including sites under consideration for housing. And the agency has so far ignored calls to identify and prioritize sites most vulnerable to rising waters.

Selby Slag in Crockett and the former Zeneca site in Richmond (pictured, above) represent two examples of shoreline sites that will remain contaminated and susceptible to toxic flooding under DTSC’s current cleanup standards.

You can help. Please sign the letter below to urge DTSC Director Meredith Williams to improve the agency's priorities. We're asking DTSC to more thoroughly clean up toxic sites and make sure the cleanups themselves are safe for neighboring communities. DTSC should also prioritize accounting for both sea level and groundwater rise in its shoreline cleanup plans.