Shipping and boating are important parts of the Bay's history, identity and economy. The Bay is a hub for commercial shipping and supports numerous ports, including the Port of Oakland—the fourth busiest in the U.S.—as well as thousands of recreational vessels.

Baykeeper was a lead responder to the Cosco Busan oil spill of November 2007 that released 53,000 gallons of bunker fuel into the Bay. Since then, Baykeeper has worked tirelessly to protect the Bay from future spills. We have played a key role in improving oil spill response policy in the Bay Area and across the country. Read more about Baykeeper's work to improve oil spill policy.

In 2010, the blowout of a sea-floor oil well operated by BP Oil released an estimated 4.9 million barrels of oil into the Gulf of Mexico. San Francisco Baykeeper stepped in to support our sister Waterkeeper organizations of the Gulf Coast as they faced this major ecological threat to their waterways. As a veteran of previous oil spills and a strong advocate for Coast Guard and oil spill policy reforms, Baykeeper provided key technical expertise to the Gulf Coast Waterkeepers and sent two staff members to aid their response efforts. Read more about our participation here.

Cleaning Up the Ghost Fleet

In 2010, Baykeeper successfully settled our lawsuit with the federal government, reaching an agreement that requires speedy cleanup of 57 decaying military ships known as the Ghost Fleet. For more than 40 years, the ships had released more than 20 tons of heavy metals such as lead, zinc, and cadmium into Suisun Bay, an inlet that connects San Francisco Bay with the Delta. Cleanup progress is two years ahead of schedule. Read more about Baykeeper's work to clean up the Ghost Fleet.

Clearing Our Waterways of Abandoned Boats 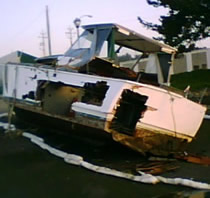 Baykeeper is tackling the issue of boats abandoned throughout the Bay and Delta. Abandoned boats are a serious threat to the Bay's water quality, as well as a navigational hazard in our waterways. Read more about Baykeeper's work to clear our waterways of abandoned boats.