Clearing Our Waterways of Abandoned Boats

Governor Signs Bill to Protect the Bay from Abandoned Boats

October 12, 2009 – Governor Schwarzenegger signed into law a bill sponsored by San Francisco Baykeeper that will help protect San Francisco Bay – and all of California's waterways – from pollution caused by abandoned boats. The bill will create a statewide turn-in program for unwanted boats and increase the penalty for those caught abandoning boats in California waterways.

The California Legislature unanimously passed the bill, AB 166, in September 2009. Baykeeper applauds the Legislature and Governor for their commitment to protecting California's waterways from this growing source of pollution.

A New Solution to Keep Our Waterways Clear of Abandoned Boats

In January 2009, California Assemblymember Ted Lieu introduced Assembly Bill 166 to address the problem of abandoned boats that are polluting California’s waterways. While current California law addresses the removal of abandoned vessels, there is nothing to prevent abandonment of dilapidated vessels. AB 166 will meet this need by creating a vessel turn-in program that allows owners of unwanted watercrafts to give vessels to a public agency for disposal, rather than abandoning them. The bill will also create a deterrent for illegal abandonment by increasing the minimum fine for boat abandonment from $500 to $1000. By providing a safe disposal option, AB 166 encourages responsible behavior by owners of aging boats and protects our waterways from dangerous pollutants.

Baykeeper is a sponsor of AB 166 along with the California State Sheriffs’ Association, California Association of Harbor Masters & Port Captains, Western Boaters Safety Group and other safe boating and law enforcement groups.

Abandoned Boats Are Unsightly and Toxic 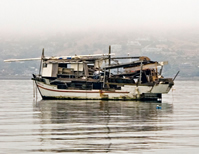 Abandoned vessels are a major problem in California and pose a serious threat to San Francisco Bay’s water quality. Derelict vessels can contain a host of toxic pollutants, and as the boats deteriorate and become submerged, these substances enter the Bay. Oil, gasoline and sewage from the boats can spread through the water, endangering wildlife and humans who come into contact with these substances. Decaying bottom paint, batteries and cleaning fluid can leach heavy metals such as chromium, copper, lead, mercury and zinc into the water. These toxins contaminate Bay sediment, where sediment-dwelling organisms ingest them, and the toxins then contaminate the food supply of all Bay wildlife. Sunken, submerged and other abandoned boats also pose a safety hazard to boaters attempting to navigate waterways.

Despite the environmental and public safety risks, federal and state laws used to require that an abandoned vessel be removed only if the object poses “a substantial hazard on navigable waterways.” This means that derelict vessels were leaking toxic substances into the Bay with little environmental or public safety oversight. A lack of funding is often identified as the biggest obstacle to effectively removing abandoned vessels, since hauling out submerged objects is costly and difficult. Removing an abandoned vessel from the water costs about $200 per foot, which means that removing one small houseboat can cost upwards of $5,000. This puts the cost of ridding the Bay of abandoned vessels and debris in the millions of dollars – a cost that our local governments are unable to bear when the State is facing severe budget shortfalls. In light of the significant costs associated with removing derelict boats, public agencies must be empowered to address the problem of unwanted boats before they are abandoned.