When an oil tanker hit the Bay Bridge Monday morning, no oil got into the Bay, according to the Coast Guard and other agencies investigating the collision. I immediately went to the scene in the Baykeeper boat to observe the situation, along with Baykeeper Program Director Jason Flanders, who took these photos. 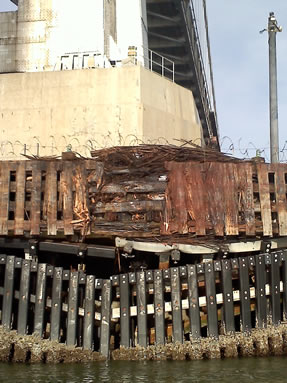 The tanker, the Overseas Reymar, damaged the bridge tower’s protective barrier, as shown in the photo at right. 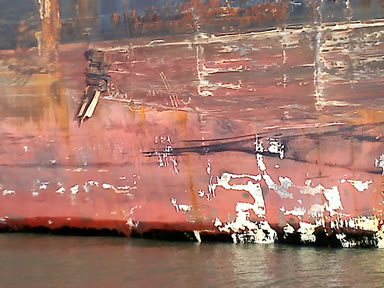 Below, part of the barrier stuck to the side of the ship’s hull, but didn't seem to penetrate the hull. No oil has leaked out.

With a quarter-mile of visibility, the tanker probably should not have been transiting the Bay. This could have led to a real disaster. The ship was carrying no oil as cargo, but it had just filled up with bunker fuel used to run the tanker itself, in preparation for leaving San Francisco Bay. If this fuel had spilled, it would have been a significant threat to the Bay, wildlife, and shorelines.

Although we’re relieved that the collision did not pollute the Bay, we still have a lot of questions about why this accident happened. We’ll be investigating the causes to understand how future ship encounters with the bridge can be avoided.

One question is about Coast Guard regulations that keep ships from sailing when fog obscures visibility, which may need to be tightened. Right now, ships are required to have at least a half mile of visibility before transiting under the Benicia Bridge, but not under the San Francisco Bay Bridge. The San Francisco Harbor Safety Plan (which is binding on pilots) similarly advises ships not leave the Port of Oakland with less than a half-mile visibility, but exempts the Bay Bridge. That means that ships heading out of the Bay from the main anchorage south of the Bay Bridge are exempt from the rules. That may need to change.

Regardless of that gap in the visibility restrictions, the Coast Guard has the authority under federal regulations to direct a ship not to transit the Bay if the Vessel Traffic Service feels there may be a risk to the environment due to restricted visibility. We’ll want to hear the recordings of communications between the Coast Guard Vessel Traffic Service and the pilot to see whether there were such concerns and to hear what instructions were given.

This incident also raises an additional issue about the responsibility of ship owners for protecting wildlife from spilled oil. Oil companies that ship oil in California waters are required to pay into a trust fund to provide funding for care and rescue of oiled wildlife during oil spills, yet the owners of ships like the Overseas Reymar pay nothing. This means that ship owners have no skin in the game. The Oiled Wildlife Care Network, the nonprofit agency under contract with the state of California to care for birds and other wildlife affected by oil spills, is facing a critical funding shortage. Oil companies paid for the government response to the accident yesterday, while the ship owner contributed nothing. Requiring ship owners to pay could help make the oiled wildlife program solvent again.

This incident has been a close call for the Bay. As more information becomes available, Baykeeper will continue to advocate for policies and regulations that will better protect San Francisco Bay from oil spills.