In the coming decades, sea levels around the Bay will rise by at least 2 feet. And new research from UC Berkeley shows that rising groundwater tables may cause flooding around the Bay Area even sooner. As a result, much of Alameda could end up underwater.

But that doesn’t mean the Island City is doomed to sink under the waves like a modern Atlantis. There’s a lot Alameda can do now to become more resilient to rising waters.

In fact, the city has already starting taking steps in that direction. Its latest effort began last year as city officials started drafting long-term goals in the form of Alameda’s 2040 General Plan, which serves as blueprint for future development and conservation (California law requires cities and counties to adopt and periodically update General Plans to allow for projected population growth).

Planning for sea level rise and other effects of climate change takes a deep understanding of the Bay's ecosystem and geography—and that's Baykeeper's specialty. Our staff reached out to city officials to provide specific suggestions for protecting the island and its inhabitants from impending sea level rise.

And Alameda listened. The city incorporated many of Baykeeper’s recommendations into their newly released General Plan, including:

Baykeeper’s advocacy in Alameda is part of a broader effort to persuade Bay Area cities to take the threats of sea level rise and groundwater rise seriously. Alameda isn’t the only city in the Bay Area with toxic sites and shoreline infrastructure vulnerable to flooding. In fact, many Bay Area cities are facing similar, urgent threats. That’s why Alameda deserves a lot of credit for kickstarting this process—and we’re here to encourage Alamedans as they turn their newly adopted General Plan into reality and set an example for cities around the Bay! 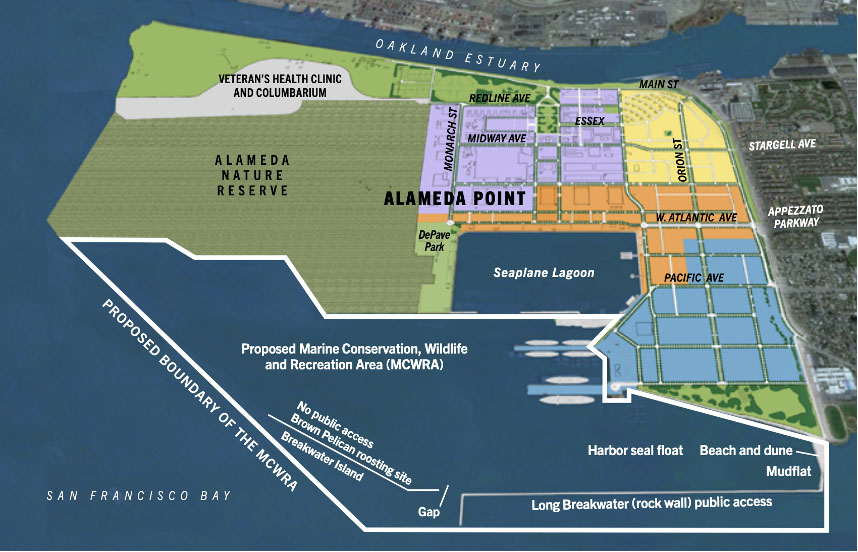 Pictured, above: Baykeeper drone footage of the Bay shoreline along Alameda's former Naval Air base.

Tackling Toxic Flooding—From Above & Below

Last week, Baykeeper co-hosted a workshop with scientists and environmental justice advocates to tackle the threat of sea level and groundwater rise inundating the Bay’s toxic sites. There are over 1...
December 15, 2021
Join us to hold polluters accountable and defend the Bay DONATE NOW >