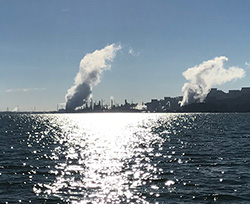 At Baykeeper, we want the dirty fossil fuel industry to transition to producing cleaner types of energy. But just what does that mean? With the industry spin doctors spreading so many mistruths, it can be difficult to recognize genuinely green solutions.

For instance, while “biofuels” sound green, their environmental benefit varies widely. Some types of biofuels—like those made from fast-growing plants such as switchgrass—can be a significant improvement over fossil fuels. However, biofuels derived from vegetable oil and other fats may represent little or no improvement. Some biofuels can even be as environmentally problematic as traditional dirty fossil fuels because of the raw materials that go into the fuels and how they are processed.

That's precisely the issue playing out now in the North Bay. The Phillips 66 and Marathon oil refineries, both located along the Bay’s shore, have long histories of polluting the surrounding communities and waters. That’s why many people initially cheered when the refineries announced plans in 2020 to convert their facilities into some of the largest renewable diesel production operations in the world.

But on closer examination, it’s unclear the extent to which the proposed North Bay biofuels projects will represent a green alternative to crude oil refining. The proposed “renewable” feedstock refining process risks a higher number of accidents and flaring incidents, can be more carbon intensive than refining crude oil, and poses an equal threat of spills into the Bay. Moreover, the converted refineries would consume massive amounts of feedstock oil currently in the food system, such as soybean oil and canola oil, potentially triggering higher food prices and increased deforestation due to palm oil production.

It’s essential for permitting agencies to review the refineries’ plans carefully and not rubber stamp them. That’s why Baykeeper and our partners are advocating for agencies to conduct a full assessment of the projected environmental and public health effects of the proposed refinery conversion plans—and, at minimum, impose all measures necessary to protect the people in the surrounding communities and ensure a genuine climate benefit.

When it comes to climate solutions, we can’t take the oil refineries’ word for it. After all, they’re the very same companies that got us into this climate mess. And we’re not going to let them distract us from holding them accountable for the health of our Bay’s wildlife and communities.

A human-made island, at sea level, surrounded by San Francisco Bay, Alameda faces an unusually high risk from sea level rise. In the coming decades, sea levels around the Bay will rise by at least 2...
February 18, 2022

Baykeeper's legal action to stop petroleum coke pollution at the Port of Benicia just got much bigger. We put Valero—one of America’s largest companies, #16 on the Forbes Top 50—on notice that we’re...
January 7, 2022
Join us to hold polluters accountable and defend the Bay DONATE NOW >