On autumn nights, flocks of western grebes end their migration by alighting on San Francisco Bay, their seasonal home. These strikingly beautiful birds are about two and half feet long, black on top with white undersides. They have yellow beaks, bright red eyes, and long, swanlike necks. Migrating by night, western grebes (Aechmophorus occidentalis) arrive on the Bay between September and November, and stay until May.

Many of these water birds come from summer nesting sites at Eagle Lake in northeastern California, according to Bob Lewis, Adult Education Chair of the Golden Gate Audubon Society. Clear Lake, north of the Bay Area, is another major summer nesting site. Western grebes also fly here from lakes in the Sierras, the Midwest, and even as far away as Manitoba, Canada. A small number of non-breeding grebes stay on the bay year-round.

Like herons, grebes spear their fish with a quick thrust of the neck. They feast on the bay’s winter runs of herring, and also eat other small fish, insects, and crabs.

The majority of the Bay’s grebes are western grebes, but they often swim in mixed flocks with Clark’s grebes, which look very similar, and also with the smaller eared grebes and horned grebes.

The official term for a flock of these birds is "a water dance of western grebes." Perhaps this is because of their exciting courtship ritual, in which two grebes dance across the water in unison, flexing their necks. Then they run rapidly side by side on top of the water, and dive in together head first. 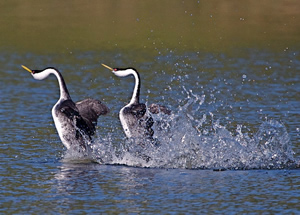 Western grebes were hunted in the early 20th century for their silky white feathers, which were used in clothing and hats. They are sensitive to pesticides and other types of pollution, but the biggest danger lurking in the Bay is the risk of oil spills.

Western grebes are one of the species most impacted by oil spills. Most oil spills in San Francisco Bay occur during the stormy, foggy months when grebes live here. In addition, grebe feet are almost useless for walking on land, so the birds can’t escape onto land from oily water. Thousands of western grebes died after being coated with oil in 2007 when the Cosco Busan tanker spilled fuel into the Bay.

Since that disaster, Baykeeper has worked hard to protect these beautiful birds and other Bay wildlife from the threat of oil spills. We supported six state oil spill bills signed into law in 2008 that mandated better protection and more effective cleanup and response. Now, Baykeeper is sponsoring state legislation to keep open the California agency that cares for birds, seals, and other wildlife that gets coated with oil during an oil spill. Without Baykeeper’s advocacy in Sacramento, a lack of funds would shut down the Oiled Wildlife Care Network, which includes more than 12 specialized facilities that stay in a constant state of readiness statewide.