No Coal in the Bay!

We were on the Baykeeper boat for a pollution patrol recently when I noticed something surprising. The stockpiles of toxic black coal that usually tower along the Richmond shoreline were the smallest I’d seen in my 15 years on patrol. 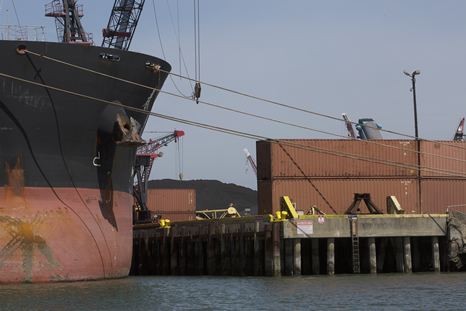 I’d expected coal stockpiles to be even higher than in the past. That’s because when coal industry corporation Bowie Resource Partners hit a roadblock in Oakland, on its bid to turn the Bay Area into a hub for dirty coal exports, the company drastically increased the amount of coal shipped out through Richmond. Industry data shows that coal exports from Richmond have more than doubled over the last two years, rising to 1.1 million tons in 2017.

The coal is stored at the Levin-Richmond export terminal, the only facility of its kind on the Bay waterfront. There, dirty coal sits in large open piles on the Bay shoreline, ready for loading onto ships bound for Asia and other parts of the world.

But Richmond and Oakland are both fighting back against more coal pollution in the Bay Area. And Baykeeper is on the frontlines with them.

In response to the steep rise in coal in Richmond, city leaders are developing an ordinance that would protect the health of local residents. It would ban coal from being stored in the open. Open train cars full of coal now rumble through Richmond and sit on railroad tracks in residential and commercial areas. Residents find black, gritty dust accumulating on windowsills and cars. The large amount of coal being stored in rail cars may be why I saw smaller coal piles on the Bay shoreline.

Baykeeper previously played a lead role in reducing pollution from the Levin-Richmond terminal. In 2011, we identified serious water quality violations at the facility and sued the company. We secured a legally-binding agreement requiring them to implement pollution controls to reduce their contamination of the Bay. However, this success is now being undermined by the rise in coal exported from Richmond. Although the Bay is better protected from pollution from the terminal’s coal piles onsite, much of the coal dust accumulating in Richmond along the rail tracks and in neighborhoods can get washed by rain and blown by wind into the Bay.

Coal exports from Richmond spiked after Oakland city leaders discovered that a bulk shipping terminal slated for construction on the Oakland shoreline was planning to export coal. The terminal developer, Phil Tagami, had concealed his plan to use the facility to export up to 9 million tons of toxic coal per year. Bowie Resources Partners was financing the Oakland terminal and would ultimately provide the coal.

In 2016—after strong advocacy by Baykeeper, other organizations, and many Oakland residents—Oakland’s city council passed a ban on coal handling and storage, to protect public health and worker safety. The ban prevents coal export from the proposed shipping terminal. Tagami then sued Oakland for breach of contract. Recently, a US District judge overturned the coal ban. But Oakland’s leaders are not giving up, and the city will appeal the judge’s flawed decision.

Corporate profits should not come at the expense of the health of Bay Area residents and San Francisco Bay. Baykeeper defended Oakland’s coal ban in court alongside the city’s legal team, and we’ll also appeal the bad court ruling alongside Oakland. As long as coal remains a threat to the Bay, we’ll keep defending our wildlife and communities from coal pollution.