Sejal Choksi-Chugh
From the June 2019 edition of Bay Crossings

As the dust settles from the whirlwind transition of the California governor’s office, it’s a relief that the new statehouse has squashed the Delta tunnels water project. 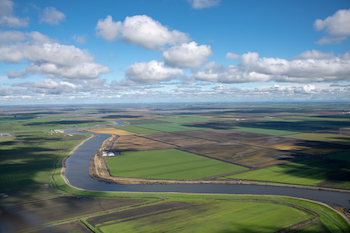 The proposal for massive twin tunnels through the Delta was an expensive infrastructure project—deceptively named “WaterFix”—that would have caused irreparable harm to San Francisco Bay.

Too much fresh water is already being exported from the Bay and Delta. The ecosystem is in crisis. Six endangered fish species are on the brink of extinction, including king salmon. The Bay and Delta are starved for fresh water and need more.

And yet, the tunnels were designed to maintain, and even increase, the unsustainable export of fresh water from the Bay and Delta to cities and farms, mostly in southern California. The estimated cost was $19 billion.

The man behind the curtain pushing for the twin tunnels was former Governor Jerry Brown. He and other tunnels’ proponents claimed that the project would make the state’s water supplies more reliable and restore the Delta ecosystem. But that was just make-believe.

California’s snowfall and rainfall vary too much from year to year. Big diversion projects can’t guarantee a more reliable water supply, if the state’s water demands are higher than what nature provides. By continuing, and increasing, the diversion of fresh water from the Delta, the tunnels would have furthered the ecosystem’s collapse.

Last month, Governor Gavin Newsom showed courage and a lot of heart by pulling the plug on this massive boondoggle. He’s instead smartly directing the state down a better yellow-brick road.

Newsom has called for a “Portfolio Approach” to water management. If done right, his plan can protect the Bay and Delta while making California water supplies more reliable.

And fortunately we already have the necessary tools to wake us from the nightmare of California’s water woes. The two keys are water conservation and water recycling.

Incentivizing water conservation—by agriculture, industry, and residents—is one of the least expensive and easiest commitments the state can make to create more reliable water supplies. And the governor’s team has opportunities to ensure that the water we save is returned to the Delta and the rivers, rather than used up by the next holder of water rights.

The other key way to improve water supplies is to recycle more water. Orange County already has a sewage treatment plant that produces water clean enough for landscaping, operating industry, and even drinking. In the past, Californians have been skeptical about using recycled water in the home. The governor’s team can help educate residents that after advanced treatment, recycled water is safe. And with a meaningful investment, most of the state’s sewage treatment plants could be upgraded to produce recycled water.

Capturingwater that falls on cities during the rainy season is another way to invest in infrastructure to create a more reliable water supply. That water can recharge groundwater supplies and be filtered and purified later for use during dry months.

Clicking these two ruby slippers of water conservation and recycling would amount to a fraction of the cost of WaterFix. And with urban areas conserving water and getting more from underground storage and recycling, cities like San Francisco and Los Angeles would need less water from rivers. That could leave more fresh river water for San Francisco Bay and the Delta.

Baykeeper will keep fighting for happy endings that safeguard Californians’ access to clean water, sustain rivers and fish, and protect the beautiful Bay we all love so much.