In our ongoing advocacy to protect the Bay’s endangered wildlife, Baykeeper recently told regulators that a newly proposed location for shoreline habitat isn’t protective enough to support the species being displaced by development. Regulators and the project developer are proposing a site in the Newark Slough to offset shoreline habitat loss in other areas—but the proposed site experiences regular flooding that pushes out wildlife, sometimes right onto a nearby, heavily-trafficked road.

When a developer proposes to build on—and destroy—existing wildlife habitat on the Bay’s shoreline, they are supposed to mitigate their impacts. One way to do that is to identify and buy into some other parcel of land that will be preserved in order to lessen the harm to the affected species. Known as mitigation banks, these new habitat areas are intended to help heal the damage caused by environmentally harmful development. They “bank,” or preserve, stretches of wetlands, tidal marshes, and other areas rich in biodiversity. 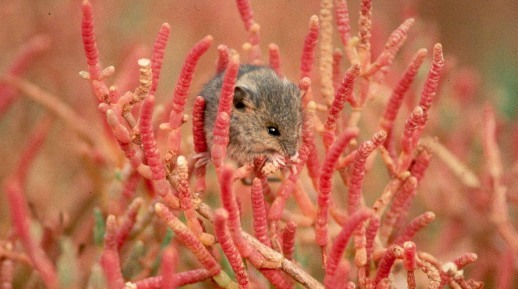 This system is sound in theory, but doesn’t always succeed in practice. The Newark Slough site was proposed as a mitigation bank for native wildlife that live in marshland, not in the water—including the endangered salt marsh harvest mouse (pictured, right) and the threatened Ridgway's rail shorebird. Unfortunately, the proposed Newark Slough site, far from being a rich marshland habitat, is often underwater (see photo, below) and flanked by a busy street.

“The Newark slough site should be classified as a mitigation bank only if it actually provides usable habitat for protected species,” Baykeeper Attorney Ben Eichenberg points out. “But most of this site floods at high tide, and that forces sensitive wildlife onto a dangerous road leading to the Dumbarton Bridge.”

Plus, the flooding of the Newark Slough area is projected to worsen with sea level rise, which could turn it from marsh to mudflat and make it completely useless as habitat for marshland animals in the coming years.

Along with our partners at the Citizens Committee to Complete the Refuge, the Ohlone Audubon Society, and the Center for Biological Diversity, Baykeeper urged the Army Corps of Engineers not to allow the Newark Slough site to be used as a mitigation bank. Instead, mitigation bank resources should be redirected to high-quality habitat sites nearby to preserve more of the Bay’s marshland.

Baykeeper strongly supports habitat restoration and protection that improves biodiversity along San Francisco Bay’s shore. We’ll keep advocating for healthy habitat for mitigation banks to protect the Bay’s wildlife and help the Bay be more resilient to the impacts of sea level rise. 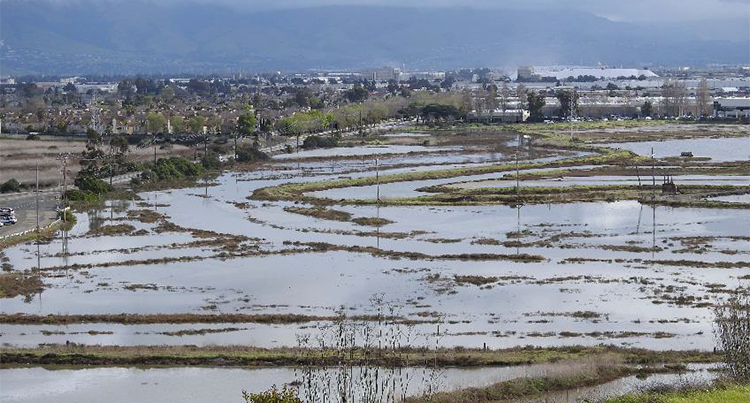 The Newark Slough site, pictured above, is often inundated.

VOTE NOV 3! Our wildlife needs someone who will stand up to polluters & Big Ag.
New Shoreline Development Under the Shadow of Chevron
Good Choice, Alameda! Replace Pavement with a Healthy New Wetland
Sharks of San Francisco Bay
A Zombie Sighting in SF Bay
Good News and Possible Bad News for the Bay