Nicole Sasaki, an undergraduate at UC Berkeley, was watching the news one day in 2007 when she learned about Baykeeper. A cargo ship named Cosco Busan had spilled more than 53,000 gallons of oil into the Bay, killing wildlife and closing beaches. Nicole was impressed by Baykeeper’s immediate response to hold both polluters and cleanup agencies accountable. She was also pleased to see that Baykeeper’s executive director and lead attorney were both women.

In that moment, Nicole set her sights on one day joining the Baykeeper team. She went on to study environmental law at Pace University in New York, and she spent time as a law clerk for the Pace Environmental Litigation Clinic, Earthjustice, and our sister organization, Hudson Riverkeeper, where she advocated for the protection of New York City’s watershed and defended public parkland. 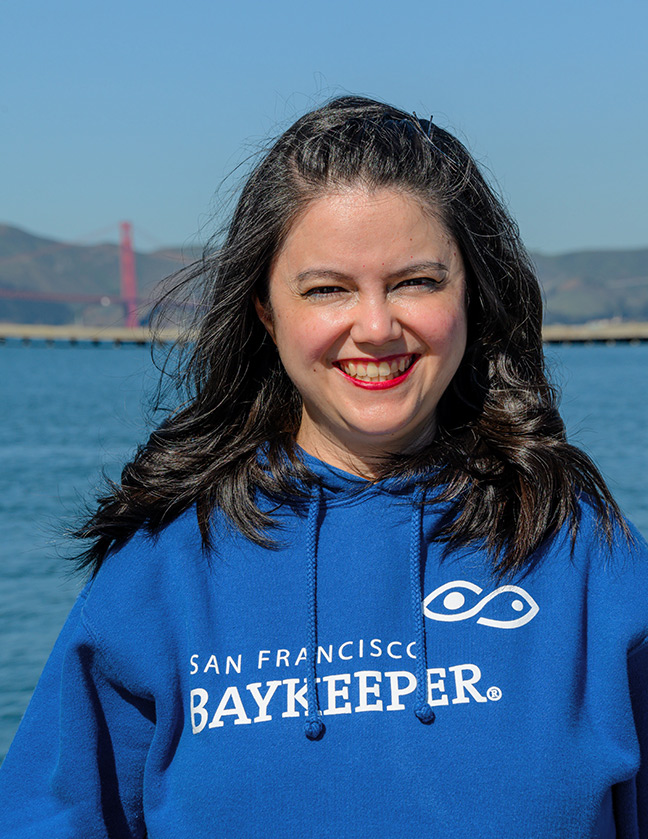 After graduating at the top of her class, it felt like fate when Baykeeper posted an opening for an associate attorney. She immediately applied, feeling confident she’d at least hear back. But Nicole almost didn’t get called in for an interview. It was only when one of her law professors called Baykeeper to recommend her to the hiring committee that we discovered there was no application for her on file. It had gotten redirected to a junk folder by our email spam filters.

But for that lucky call—and nobody emptying the spam folder—Baykeeper might have missed out on one of the most talented environmental attorneys in the field!

Nicole and our allies were up against Trump’s EPA, who were attempting to convince the judge that the South Bay salt ponds were actually land and didn’t merit Clean Water Act protection. The purpose of their nonsensical argument was to make it easier for the ponds, owned by corporate giant Cargill, to be sold and paved over for development.

The judge sided with us and the Bay, ruling the ponds are wet, therefore water. And since they’re connected to the Bay, they most definitely should be protected under the Clean Water Act. Now thanks to Nicole and our co-counsels’ hard work, those 1,400 acres can continue providing habitat for wildlife, have the potential to be restored as wetlands, and provide a natural buffer to protect against climate-driven sea level rise.

Nicole’s day-to-day work entails making sure that polluters live up to their obligations under the Clean Water Act and their legal settlements with Baykeeper. And right now, she’s also preparing for her first case before the Federal Ninth Circuit Court of Appeals. Stay tuned for news about that one!

Photo of Nicole by Robb Most

Announcing Pence for the Planet Partnership

"She Left Me With a Lot of Hope for the Bay"

I recently had the pleasure of speaking with the team at Beyond the Fog, a local podcast hosted by three San Franciscans who are passionate about everything that makes the Bay Area unique. Their goal...
June 9, 2022

And the Award Goes to...

Protecting the health of San Francisco Bay is a team effort. That's why it's a special treat for us every spring to recognize Baykeeper’s Blue Rivet award winners. It's our opportunity to celebrate...
May 11, 2022
Join us to hold polluters accountable and defend the Bay DONATE NOW >