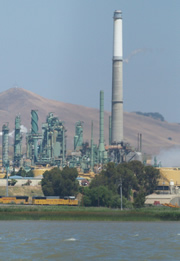 May 2010 – San Francisco Baykeeper and our statewide partner the California Coastkeeper Alliance have successfully helped secure an improved policy for phasing out the use of once-through cooling at power plants in California. This destructive technology kills billions of marine species every year at power plants throughout California, including the Potrero Power Plant in San Francisco and two plants in the Delta at Pittsburg and Antioch.

Baykeeper is part of a coalition of environmental and fishing groups that has been fighting at the statewide level for many years to end the use of once-through cooling. Earlier this year, the State Water Board issued a draft once-through cooling policy that included numerous loopholes for industry exemptions and delays, as well as very little oversight by regulators. Baykeeper and partners, led by California Coastkeeper Alliance, mobilized to oppose the policy's weaknesses and propose specific improvements that would reduce the harm to coastal and Bay-side waterways and marine life. Last week, after a nine-hour hearing that included testimony from many environmental representatives, the State Water Board agreed to most of the requested improvements.

The new policy to phase out once-through cooling includes several key improvements over the earlier draft, including:

These improvements will make a significant difference in the speed and effectiveness with which power plants replace once-through cooling systems, which in turn will significantly reduce the harm to California's waterways and marine life.

What is Once-Through Cooling?

Once-through cooling is a process that pulls in cold sea and bay water to cool power plant turbines and then releases the heated water back into the environment. Every day, 16 billion gallons of marine waters are sucked into California’s power plants, killing nearly everything that passes through the plants’ machinery. Larvae and small fish get pulled into the plant and die in the turbines (“impingement”), while larger fish and marine mammals get trapped on the intake screens by the force of the rushing water (“entrainment”). 79 billion fish and other marine animals are killed every year in California waters by once-through cooling.

How Once-Through Cooling Threatens the Bay and Delta

The Mirant Delta corporation operates three once-through cooling plants on the Bay, in San Francisco, Pittsburg and Antioch. Although the three Bay plants are “peaker plants” – meaning they provide energy only during the periods of highest consumption – the plants’ cooling systems operate year-round and consistently impact San Francisco Bay. The intake process, which causes the impingement and entrainment of marine animals, can kill organisms from all levels of the food chain and disrupt the normal processes of the Bay’s ecosystem. Additionally, the plants release heated water that can reach temperatures as high as 100 degrees. The Bay’s normal temperature rarely goes above 70 degrees, so a sudden influx of hot water can disrupt the Bay’s delicate ecosystem and the animals living in it.

In the meantime, San Francisco Baykeeper and our partners and allies will carefully monitor the phase-out of once-through cooling at power plants throughout California.