There’s Too Much Selenium in the Bay, and It Could Get Worse!

Submissions for this form are closed. 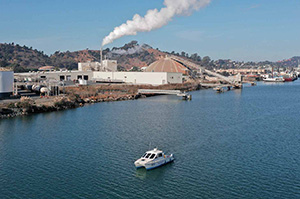 Scientific studies recently found deformities in more than 80 percent of young Sacramento splittail, a minnow that lives in Suisun Bay and the Delta. The culprit? Selenium pollution. Previous studies also revealed high levels of this pollutant in other Bay fish and clams.

Selenium is a toxic substance that keeps building up. Every microgram is passed forward from one animal to the next, all the way up the food chain in a process called "bioaccumulation." Anything—or anyone—that frequently eats contaminated fish from the Bay risks accumulating high levels of selenium.

Now, the science is clear that the amount of selenium in the Bay's waters is already too high.

Yet, in November, the San Francisco Bay Regional Water Board is considering approving regulations for selenium levels in the Bay that will allow some polluters to exceed existing limits by nearly 165 percent!

Specifically, the agency is considering allowing higher discharge rates for oil refineries around the Bay, even though very high concentrations of selenium are currently found at the mouth of Pacheco Creek, where the Marathon and Tesoro refineries discharge contaminated wastewater into the Bay.

Oil refineries often exert undue influence over the regulatory process. In 2017, oil industry lobbyists successfully persuaded the Regional Water Board not to require any reduction in selenium discharges. And now it looks like the agency might allow Big Oil to put profits before the health of the Bay’s wildlife and Bay Area residents again.

The Regional Water Board is set to adopt a new permit at its November 9 meeting that would allow the Martinez refinery to discharge more than 875 pounds of selenium per year–roughly the equivalent weight of five washing machines. Baykeeper will be urging them to do the right thing for the Bay and require selenium reductions instead. You can also ask the agency to protect the Bay and our local communities from selenium pollution by signing the petition below.