Do Fireworks Pollute the Bay?

Sejal Choksi-Chugh
From the July 2016 edition of Bay Crossings

All around San Francisco Bay during Fourth of July celebrations, brightly colored fireworks light up the night sky. It’s a fun tradition. But how much does the rockets’ red glare pollute the Bay?

Fireworks are often set off over water, because setting them off over land creates a risk of fire. However, fireworks can cause so much pollution that some communities ban them over lakes used as drinking water sources. 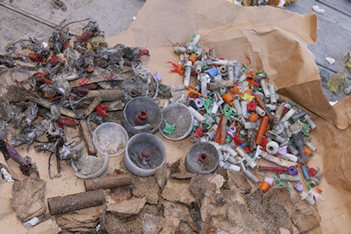 Following the second fireworks show a week later, 30 more pounds of fireworks debris washed up at the Aquatic Park beach. More continued to wash up for weeks. It’s likely that even more remained in the Bay, washed up on other shorelines, or washed out into the Pacific Ocean.

This pollution doesn’t have to happen. There are methods of preventing, or at least minimizing, pollution from fireworks. In San Diego, companies putting on fireworks displays are required to use practices that give maximum protection to the body of water below. Here are some ways to do that:

Remove debris immediately. Within 24 hours, cardboard, plastic and other debris should be collected from everywhere it falls on the water or washes onto shore.

Prevent fireworks from washing overboard. When fireworks are launched from barges, entire boxes can fall into the water before they are even set off. Fireworks aboard boats must be properly secured at all times.

Baykeeper is advocating for new agency regulations that give San Francisco Bay these protections from fireworks pollution, plus more. The company that puts on the majority of local fireworks displays, Pyro Spectaculars, is cooperating with us on this effort to improve fireworks shows over the Bay.

Following this year’s Fourth of July fireworks displays by San Francisco and Berkeley, Baykeeper and the nonprofit organizations Shark Stewards will hold two investigative cleanups. We’ll investigate how much fireworks debris has washed onto the shorelines at the Berkeley Marina and at Aquatic Park in San Francisco. We’ll clean up whatever we find. And we’ll continue to work with the company and local agencies to improve practices around future fireworks displays—toward a Declaration of Independence for San Francisco Bay from future fireworks pollution.

Keeping an Eye on the Bay by Land, Sea & Air
The case of the missing birds at Aquatic Park
How a Hotline Tip Helped Stop Pollution around Chase Center
Stopping Fireworks Pollution in San Francisco Bay
Tipster Reports Sludge Threatening the Bay
Taking Action to Protect the Bay from Fireworks Debris