Taking Action to Protect the Bay from Fireworks Debris 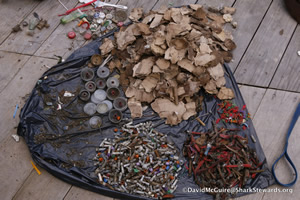 The contamination first became apparent the day after the first Super Bowl fireworks display on January 31. Large amounts of fireworks debris contaminated the Aquatic Park waters, which are used by open-water swimmers. Initial reports indicated that swimmers who were in the water the morning of February 1 encountered significant plastic and cardboard debris that interfered with their swim. That morning, National Park Service staff removed charred fuses, plastic, and cardboard pieces from the beach at Aquatic Park, filling four 50-gallon trash containers.

In response to the reports, Baykeeper investigated how this contamination was allowed to happen. We learned that the companies putting on the fireworks displays were not required to secure Clean Water Act permits, so they were not expected to monitor or contain debris to prevent pollution in the Bay. 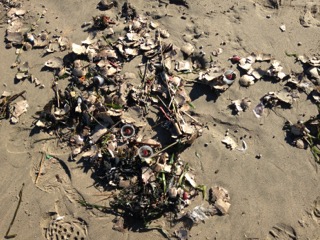 Baykeeper immediately urged regional water regulators to put requirements in place to prevent future contamination. We also sent a letter to the company that conducted the fireworks display, Pyro Spectaculars, telling them that pollution of this type is unacceptable and that they need to take stronger measures to prevent it. In response, local regulators suggested specific measures to try to reduce debris in time for the second fireworks show.

A Regional Water Board official told the San Francisco Chronicle that they may investigate the Super Bowl shows and issue fines to those responsible. Based on our discussions with the agency staff, the Board is also considering Baykeeper’s recommendation that producers of fireworks displays on the Bay be required to obtain a Clean Water Act permit detailing how they will keep debris from polluting the Bay. Baykeeper will monitor the Board’s actions and keep working to ensure that San Francisco Bay is protected from fireworks contamination.

While fireworks celebrations are a fun tradition around San Francisco Bay, the responsible companies must ensure proper cleanup of plastics and other debris. They cannot leave it to nonprofits to clean up the mess or leave it in the Bay.

To report pollution in San Francisco Bay to Baykeeper, call our hotline at 1-800-KEEP-BAY, email hotline@baykeeper.org, or click here.

The traditional holiday season of thanks is taking on new flavor as I reflect on what Baykeeper has accomplished over this past year. There’s so much to be grateful for. We made it through the worst...
November 23, 2021

Cole Burchiel came to Baykeeper after spending time as a park ranger in Vermont; he was hiking the Appalachian trail when he got the call to interview. Now Cole manages Baykeeper’s signature Bay...
December 19, 2020

The Case of the Missing Birds at Aquatic Park

Last fall, paddlers at Berkeley’s Aquatic Park noticed something wrong.  The water had become cloudy and oily, the normally plentiful fish and birds were nowhere to be seen, and the water level was...
November 19, 2020
Join us to hold polluters accountable and defend the Bay DONATE NOW >