Say No to Coal Pollution in the Bay

Fool me once, shame on you. Fool me twice, shame on me. It looks like developers are trying to fool all of us who love San Francisco Bay—twice. 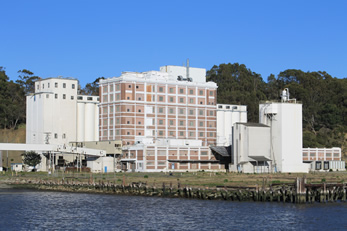 For the second time in less than a year, development threatens the Bay with contamination from coal. Developers are proposing to build a shipping terminal at the site shown at right on the shore of Mare Island Strait in Vallejo. They may be trying to pull the same trick that an Oakland developer used: get permits to build the shipping terminal first, and then wait until later to admit that it will be used to export coal.

Coal contains arsenic, lead and other toxins. If either of these facilities are approved to handle coal, more coal would be shipped to the Bay Area by train in open rail cars, shedding toxic dust and pieces of coal into neighborhoods near railroad tracks and San Francisco Bay’s watershed. Coal and coal dust could also be blown into the Bay if the coal is stored on the shoreline awaiting export, or during the loading of coal onto outbound ships.

Coal dust pollution can have effects that range from asthma in kids to bronchitis in adults, and it also interferes with fish reproduction. The Bay’s smallest creatures can ingest dust and tiny coal particles. Fish eat the small creatures, so the toxins could move into the bodies of anything that eats the fish, including harbor seals, shoreline birds and people who fish from Bay piers and shores.

The proposed export terminal also poses another toxic threat. The project includes a new factory at the site of a former General Mills flour mill that has been closed since 2004. Orcem, an Irish company, plans to manufacture cement, a basic ingredient of concrete and stucco, using granular blast furnace slag. Orcem emphasizes that this is a “green” type of cement, because it takes less energy to produce than the most commonly used cement, Portland cement.

But a substance as dangerous as granular blast furnace slag does not belong on the shoreline of San Francisco Bay. People who handle this slag are warned that overexposure can cause chemical burns, irreversible skin and eye damage, lung failure and cancer. Slag would arrive at the cement plant by ship. If it were spilled into the Bay as it was being unloaded, this caustic substance could harm any wildlife that happened to be nearby.

The proposed project would also harm San Francisco Bay in other ways. To build the shipping terminal and deep water port, several acres of Bay wetlands would have to be destroyed. The public would lose access to some shoreline areas that are now open, and the San Francisco Bay Trail would be disrupted.

Vallejo leaders shouldn’t let the same showdown now taking place in Oakland happen in their town. An Oakland developer concealed his plan to export up to nine million tons of Utah coal until after he got a go-ahead to build a shipping terminal on the old Oakland Army Base. For more coverage, see “Coal from Utah Threatens the Bay with Pollution” in the September 2015 issue of Bay Crossings.

Baykeeper, Sierra Club and Vallejo residents are urging Vallejo leaders to make sure they understand all the pollution risks from the proposed shipping terminal and cement plant—and stop this project before it has a chance to contaminate Vallejo and San Francisco Bay.