Protecting the Bay from Trump's EPA

Sejal Choksi-Chugh
From the October 2019 edition of Bay Crossings

This bizarre decision is dangerous for San Francisco Bay.

Corporations created the South Bay salt ponds by building levees in the Bay before the Clean Water Act was enacted.  In an abrupt reversal of its own 2016 draft opinion, EPA says the timing of those levees now means that the ponds are land instead of water.

It’s nothing but a thinly veiled attempt to allow Cargill, the multinational corporation that owns the area, to pave over the ponds without worrying about meeting Clean Water Act safeguards.  In reality, if the levees were removed, Bay waters would flood the area again and eventually return the ponds to their marshy wetland state.

That’s why Baykeeper is suing the Trump administration in federal court, fighting to overturn this decision.

The former wetlands are the brightly colored South Bay salt ponds that you can see out the window of a plane flying over the Bay Area. Cargill’s goal is to fill two square miles of salt ponds on the Bay's Redwood City shoreline so it can be developed into offices, homes and condos, and retail spaces.

Baykeeper is joining with Save the Bay, Citizens Committee to Complete the Refuge, and Committee for Green Foothills to defend this part of the Bay’s shoreline.  And our partners are also working to prevent Cargill from getting the state and local permits the company will need before construction on the salt ponds can begin.

The salt ponds have been used for industrial-scale salt harvesting for over a hundred years. But centuries before, the ponds were salt marshes where the native people of the Bay Area harvested small amounts of salt for everyday use.

Erecting buildings on these former wetlands is a bad idea for other reasons, too. In 50 to 80 years, sea level rise will put those buildings partly underwater. And the area is currently home to thousands of shorebirds and local wildlife that would be displaced if the ponds were paved.

Restoring the ponds to wetlands will help protect the Redwood City shoreline against sea level rise. Restored wetlands will also protect the nearby Silicon Valley tech campuses and infrastructure like sewage treatment plants that, if flooded, could badly pollute San Francisco Bay. And the wetlands will provide food for seasonal and year-round birds, plus habitat for endangered species.

There are even more reasons to overturn the Trump administration's gift to Cargill.

Because the Trump decision removes the need for a protective federal development permit, it increases the ponds' market value and allows Cargill to profit even more by destroying the Bay. A higher market value also makes it harder, and more expensive, for taxpayers to save the Redwood City ponds through a public purchase.

And if the Trump decision stands, it will be easier for Cargill, and any other corporation, to pave other parts of the Bay, including similarly positioned salt ponds on the Newark shoreline.

If you want to protect the Bay from the Trump administration’s attempts to richly reward the Cargill corporation for destroying wetlands, join Baykeeper and support us in this fight. 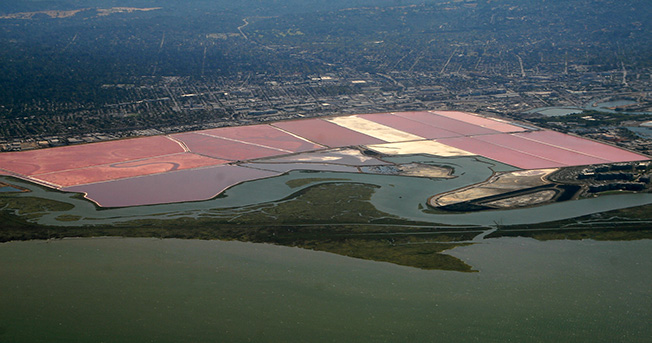 Pictured: The watery red salt ponds on the Redwood City shoreline of San Francisco Bay. The Trump Administration has made it easier to build offices, condos, and retail spaces there.

Photo at top by Autonomous Imagery. Photo above by Doc Searls, Flickr/CC.

Judge Rules Ponds Are Water
Full of it: Keeping Horse Manure out of the Petaluma
Lawsuit Aims to Force Trump to Protect Imperiled Longfin Smelt, Seven Other Species
If We Snooze, the Bay Will Lose
Clean Water Act Turns 40
The Clean Water Act (Also Known As the Law That Made the Bay Smell Better) Turns 40