The Battle for the Bay’s Colorful Salt Ponds

If you’ve travelled by plane over the Bay Area, you may have seen the bright red, orange, and yellow ponds in south San Francisco Bay. They look pretty and calm, but they’re actually the site of a battle between those who want to restore the area to wetlands and large corporate interests envisioning a complex of offices and condominiums. 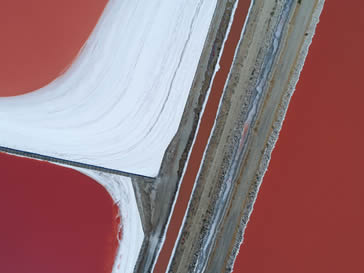 The South Bay salt ponds were once wetlands where the native people of the Bay Area harvested small amounts of salt. In the 19th century, profit-seekers arrived and built ponds for industrial-scale salt harvesting, destroying the wetlands. Cargill, a multinational corporation, later purchased the industrial operation, and still manufactures salt there today. A tiny amount becomes table salt, and the rest is used for road salt, swimming pools, and ingredients for the chemical industry.

Cargill makes salt by slowly pumping Bay water through a series of evaporation ponds, in a process that lasts three years. As the water evaporates, the brine that remains gets more and more salty. The intense hues of the ponds are the result of a few types of colorful bacteria, algae, and small creatures. These are normally present in Bay water in tiny amounts, but they are the only living things that survive in highly salty water. As the brine reaches the ideal level of salt for each combination of micro-organism to skyrocket in numbers, the pond takes on a different color.

Today, Cargill’s salt-making operation covers about 12 square miles of former Bay wetlands. That’s down significantly from the original operation, because Cargill sold 23 square miles of former salt ponds in 2003. With the help of $100 million in funding from federal and state governments, and foundations, the ponds were added to the Don Edwards San Francisco Bay National Wildlife Refuge. They are being restored as wetlands in a process that can take from several years to 30 years. As the ponds are returned to their natural state, they lose their bright colors and take on the brown or dark green hues of wetland plants.

Restored South Bay wetlands provide food for seasonal and year-round birds, plus habitat for endangered species like the salt marsh harvest mouse. And we’ll see the biggest benefit from restored wetlands in the future. Wetlands will help protect the South Bay shoreline against sea level rise, and also protect the nearby Silicon Valley tech campuses and infrastructure like sewage treatment plants that, if flooded, could badly pollute San Francisco Bay.

But there will be less of that protection from sea level rise if  Cargill gets its way. The company is pushing to develop part of the remaining 12 square miles of salt ponds it still owns into a complex of offices, condominiums, and retail spaces. If buildings are constructed there, the South Bay will lose the protective benefit of wetlands that could have been restored. And according to scientific projections, sea level rise would put those buildings partly underwater in the next 50-80 years.

Baykeeper is working with South Bay nonprofit community and environmental organizations to oppose Cargill’s development plans, and we’ll keep fighting until the development ideas are rejected and the area can be restored to wetlands.