Changing the Fate of the Bay

Thirty years ago, media reports warned that San Francisco Bay was dying. Anti-pollution laws were not being enforced. Polluters were dumping waste into the Bay with no fear of detection. In 1989, research scientist Dr. Michael Herz determined that the Bay needed a defender—and founded San Francisco Baykeeper. Mike set the course Baykeeper still pursues today: patrolling the Bay by boat, finding and stopping polluters, and defending the Bay from the biggest threats.

In 30 years, Baykeeper has changed the fate of San Francisco Bay:

Investigated pollution: Baykeeper staff and volunteer skippers have logged more than 15,000 hours patrolling the Bay in the Baykeeper boat, investigating polluters. Our science team has collected hundreds of water samples to test for pollution. And we’ve investigated thousands of tips to our Pollution Hotline from concerned Bay Area residents. After investigating, we took action that stopped the polluters. 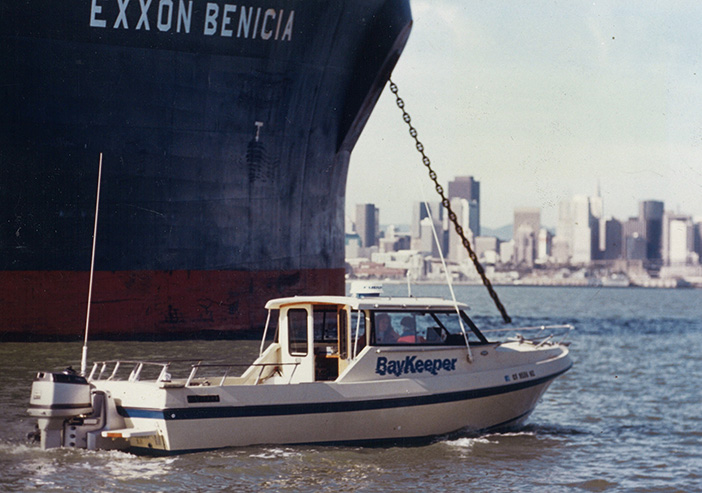 Stopped polluters: Our lawyers have held more than 250 of the biggest industrial polluters accountable to ensure they’re not illegally dumping toxic chemicals and heavy metals into the Bay. In the 1990s, Baykeeper sued a major oil refinery—owned at various times by Unocal, Exxon, and Tosco—and forced them to reduce their selenium contamination of the Bay. More recently, our lawsuits have required upgrades to 20 aging Bay Area wastewater treatment systems to prevent millions of gallons of sewage pollution from entering the Bay every year.

Defended the Bay’s natural resources: Baykeeper’s decades of work to preserve wetlands will make the Bay stronger and better able to withstand the grave new pressures of climate breakdown. And our long-term campaigns to protect the Bay’s sand, sediment, and freshwater flows will create a healthier, more resilient Bay.

For 30 years, facing down constant threats and major polluters, Baykeeper has been a fierce champion for San Francisco Bay. With your support, for the next 30 years, we’ll keep protecting the Bay we all love.

This article is from the 2019 Spring/Summer Baykeeper News.

Why Do Seagulls Live on the Sea?
COVID-19: OUR PRECIOUS BAY NEEDS YOUR PROTECTION NOW MORE THAN EVER ...
A Message from Sejal Choksi-Chugh: Diversions for Sheltering in Place
Bay-themed Activities for Kids at Home
2018-2019 Baykeeper Supporters
Anchor Brewing Company Debuts Baykeeper IPA in Cans