Baykeeper is working to end the destructive and unregulated practice of fracking to extract gas and oil from wells across California. Because California has no regulation of this process, oil companies are being allowed to extract oil from our state’s bedrock with no protections in place for the environment and public health. Fracking is a major threat to the health of San Francisco Bay and the Delta watershed, and needs to be outlawed in our state. 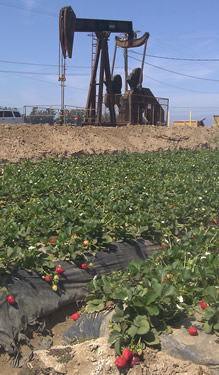 Fracking (hydraulic fracturing) is the process of injecting millions of gallons of water, sand, and toxic chemicals underground at high pressure to extract oil or gas. The technique is currently being used in hundreds of California gas and oil wells. Oil companies in California aim to greatly increase fracking in order to extract an estimated 15 billion barrels of oil from the Monterey shale, a large underground deposit of oil trapped in shale that stretches from the northern San Joaquin Valley into Los Angeles County, and west to the coast. Additional deposits lie beneath the Coastal Range in the Bay Area.

Fracking is one of several unconventional means of accessing oil trapped in the fine matrix of California’s buried sedimentary rocks. Other related methods include the use of acids to dissolve the underground rock holding the oil. These unconventional extraction methods include a new technology called “directional drilling,” which is sometimes referred to as horizontal, slant, or “octopus” drilling. With the ability to bore wells horizontally, one old vertical well can now be re-drilled, with horizontal tentacles reaching as far as two miles in many directions, like the spokes of a wheel.

Fracking poses many serious environmental and public health problems. Injecting fracking fluid and water into wells at high pressures can result in oil spills that impact our rivers and creeks. Currently there are no requirements for reporting such spills, and no funds for the state’s Office of Spill Prevention and Response to respond, even if they found out about a spill.

In the rest of the country, most contamination identified from fracking has been in groundwater, as a result of waste fluids re-injected underground after oil extraction. Unfortunately, injection of all kinds of hazardous wastes is legal at the federal level, and fracking wastewater is completely exempt from federal waste laws. California has no controls on what is injected, even if the injection wells are close to groundwater aquifers. The state also has no requirements that groundwater be monitored for contamination.

In addition, each “frack” requires millions of gallons of water—water that is already in short supply for residents, businesses, and industries like agriculture, as well as for purposes such as restoring the Delta ecosystem. In a state with little water to spare, use of water for fracking is irresponsible.

To make matters worse, draft regulations published recently by the California Department of Oil, Gas and Geothermal Resources, and in several proposed state bills, would extend the federal “Halliburton loophole.” This rule allows oil companies to keep secret the exact toxic chemicals used in fracking fluid. In the guise of protecting “trade secrets,” the oil industry is allowed to undermine the public’s right to know about hazards to the environment and public health.

Fracking poses additional dangers. The US Geological Survey has determined that fracking has triggered earthquakes, even in such places as the seismically dormant Midwest. Oil companies should not be allowed to create further risk to the environment and public safety by activating California’s major earthquake faults in pursuit of oil.

Baykeeper believes that fracking should be outlawed in California. We are now advocating in support of state legislation that would create a moratorium on fracking until its safety can be proven and adequate regulations are in place. In the meantime, Baykeeper is working with our partner organizations and California legislators to mandate that oil companies notify communities about fracking in advance, disclose the chemicals used in fracking fluid, and require groundwater monitoring around fracked wells.

Currently, twelve fracking-related bills are being considered in the California Legislature. We will keep you informed as they make their way through the legislative process. Baykeeper will continue to advocate on your behalf for statewide legislation that protects San Francisco Bay, the Delta, and all of California from the myriad environmental dangers posed by fracking.