In the 32nd victory for Baykeeper’s Bay-Safe Industry Campaign, San Rafael Rock Quarry recently agreed to improve its operations to protect San Francisco Bay from contaminated runoff. The quarry is on the Bay shoreline, and during rainstorms, polluted rainwater has run off the site directly into the Bay. 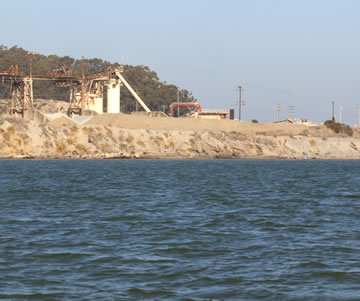 San Rafael Rock Quarry produces rock, gravel, and sand for uses that include road repair, levee repair, and building construction. The materials are loaded onto trucks and barges for delivery. Baykeeper sued the quarry under the Clean Water Act, based on the facility’s own reports of five years of polluted runoff entering San Francisco Bay. Pollutants included iron, nitrite, nitrate, and total suspended solids (a measure of small particles, including silt and industrial waste, in water). All these pollutants were at levels higher than recommended by the EPA.

Baykeeper’s legally-binding agreement requires the company to make improvements to reduce polluted runoff, including increasing the capacity of the facility’s storm water retention basins if necessary. Quarry staff will continue to test the site’s storm water for pollutants. Baykeeper will monitor the results, and if the runoff is still polluting the Bay, require additional pollution controls.

Top photo by Robb Most. Thanks to LightHawk Conservation Flying. Photo at right by Don Ross.