Pacific Galvanizing in Oakland agreed last week to keep runoff contaminated with metals from flowing into nearby storm drains that empty into San Francisco Bay. The agreement settled Baykeeper’s Clean Water Act lawsuit against Pacific Galvanizing, and will protect the Bay from pollutants that include zinc, lead, aluminum, iron, oil, grease, fuel, sulfuric acid, and other toxic chemicals. 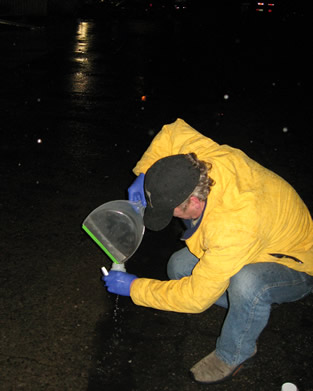 Baykeeper began investigating Pacific Galvanizing after we found that the facility’s own testing showed that for five years, the site’s runoff has contained pollutants in amounts higher than EPA levels of concern. Earlier this year, Baykeeper Volunteer Pollution Investigator David Wren, shown in the photo at right, collected a sample of storm water running off the site. Our laboratory testing confirmed that the runoff was contaminated with high levels of several metals.

Galvanizing is a process where products made of steel or other metals are coated with molten zinc to prevent rust. Pacific Galvanizing’s preparation process also involves immersing the metal products in sulfuric acid.

The company already had some controls in place to prevent runoff pollution, including a system for filtering polluted storm water before it leaves the site. The galvanizing process also takes place inside the facility’s building, where it is not exposed to rain. However, the company stores metals and other materials on paved outdoor yards exposed to rain, and trucks and forklifts are used to move materials around. Metal and acid residues, oil and fuel from vehicles, and dirt all accumulate on the paved areas. When it rains, the accumulated pollution has been washing down the facility driveways into storm drains that flow, with no filtering or treatment, to San Leandro Bay, an inlet of San Francisco Bay.

Baykeeper’s settlement agreement requires Pacific Galvanizing to install a trench drain at the end of its driveway to collect storm water and direct it to the facility’s storm water treatment system. The company will also vacuum sweep its paved areas and driveways twice per day during the rainy season to help reduce pollutants coming in contact with storm water.

In addition, to partly make up for its past pollution, Pacific Galvanizing will provide funds to The Rose Foundation for Communities and the Environment for projects by other nonprofits that benefit the San Francisco Bay watershed.

This legally-binding cleanup agreement with Pacific Galvanizing is the latest victory in Baykeeper’s Bay-Safe Industry Campaign. The campaign targets widespread, illegal runoff that flows into San Francisco Bay from most of the Bay Area’s 1,300 industrial facilities. In addition to legal action against Pacific Galvanizing and other facilities found to be significantly polluting the Bay, the campaign includes outreach and education to industrial facilities, and advocacy for tighter regulations on industrial storm water.