Baykeeper is celebrating a new victory to stop pollution in San Francisco Bay. We recently reached an agreement with a polluting industrial facility, Asphalt Shingle Recyclers, to keep contaminated rainy-season runoff from flowing off its Oakland property into Bay tributaries.

Asphalt Shingle Recyclers, LLC, recycles concrete, asphalt shingles, and other construction debris. The facility discharges storm water into a ditch outside its northern perimeter that empties into East Creek Slough. The slough connects to San Leandro Bay, an inlet of San Francisco Bay.

When our team met with the owner, the company was very cooperative in devising a plan to keep these toxics out of the Bay, agreeing to improve basic pollution controls and filter rain water flowing off the site.

Baykeeper was particularly concerned about this facility’s runoff because asphalt shingles are a source of polycyclic aromatic hydrocarbons, or PAHs, a toxic chemical that tends to accumulate in wildlife as the pollutant moves up the food chain.  The company has agreed to regularly test its runoff for PAHs as part of its legally binding agreement with Baykeeper.

To help compensate for past pollution, Asphalt Shingle Recyclers will provide $20,000 to the Rose Foundation for Communities and the Environment to support other nonprofits’ projects restoring San Francisco Bay.

This settlement marks the 38th victory so far in Baykeeper’s Bay-Safe Industry campaign, which targets the widespread illegal practice of releasing polluted runoff into San Francisco Bay. Eighteen industrial facilities have already reduced their pollution to below EPA levels of concern or have completely stopped polluting. We will continue to work with the remaining 20 industrial facilities, including Asphalt Shingle Recyclers, to implement effective controls to protect San Francisco Bay from pollution. 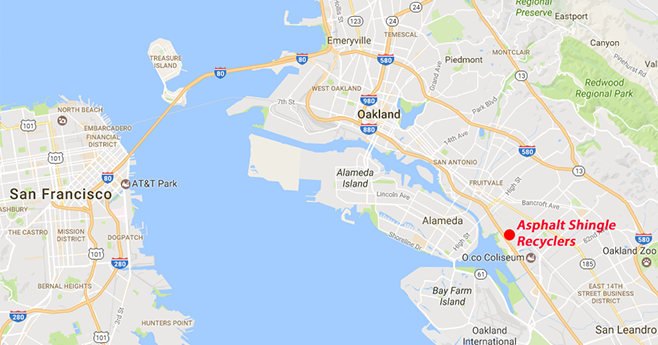