Across the nation, more trains are hauling tank cars full of crude oil over rail bridges that are deteriorating and unsafe. That’s the finding of a first-of-its-kind investigative report by the Waterkeeper Alliance, San Francisco Baykeeper’s international alliance of Waterkeeper organizations, and Forest Ethics. 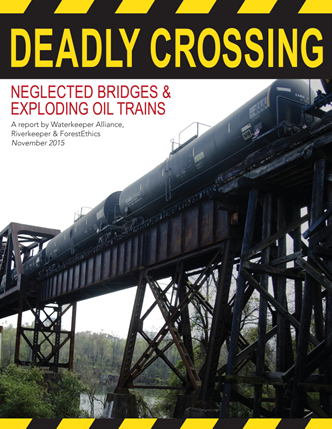 Baykeeper conducted 49 inspections of rail bridges around San Francisco Bay, and found several with serious safety concerns. For example, a bridge that crosses over the channel connecting Lake Merritt to the Oakland-Alameda Estuary has cracked concrete pilings with exposed steel rebar. A derailment on this bridge would carry oil into the heart of Oakland and the Bay. A petroleum pipeline also runs along the bridge.

Since 2008, oil train traffic has increased by over 5,000% along rail routes leading from production fields in central Canada, the Great Plains, and the Rockies to refineries and crude oil hubs along our nation’s coasts. There has also been a surge in the number of oil train derailments, spills, and fires.

Federal rail bridge safety standards provide little protection from this growing threat, the report found. Inspections are inadequate, regulations are lax, and there is no required minimum engineering standard for rail bridges.

To decrease the threat of oil spills resulting from train accidents, the report makes recommendations that include:

Baykeeper’s work on the Deadly Crossing report is part of our efforts to protect San Francisco Bay from the increasing threat of oil spills resulting from train accidents in the Bay watershed.

Last year we helped orchestrate passage of a state law that requires railroads to take more responsibility for planning for response and cleanup of oil spills.

Baykeeper is also opposing the proposed expansion of the rail yard at the Valero refinery in Benicia because it would bring long trains of tank cars full of crude oil along tracks near Suisun Bay, a major San Francisco Bay inlet.

In addition, we oppose the proposed WesPac Pittsburg Energy Infrastructure Project, which would reactivate and expand a now-closed marine shipping terminal to receive crude oil and partially refined crude oil from trains, ships, and pipelines.

And Baykeeper joined with Waterkeeper organizations across the country to urge federal regulators to tighten lax regulations on crude oil shipped by rail. Some of this crude oil is highly volatile, yet it is shipped in railroad tank cars not designed for flammable substances.

Baykeeper will continue working to protect San Francisco Bay from the threat of oil spills from trains, as well as from ships, pipelines, and all other sources of oil spills.

Thanks to Baykeeper volunteers Roger Cunningham, Robert McKinney, and Robb Most for conducting bridge inspections for the Deadly Crossing report project.

See a video of unsafe rail bridges uncovered by inspections for the Deadly Crossing report.