The Cleanup of the Ghost Fleet is Now Complete

The Ghost Fleet of Suisun Bay—the decaying military ships that poisoned the San Francisco Bay ecosystem for 40 years—is finally gone. Legal action brought by Baykeeper and our environmental partners led to a federal government cleanup and removal of the 57 ships, which started in 2010 and was completed ahead of schedule this month.

The Ghost Fleet (also known as the "Mothball Fleet") was a collection of long-defunct military ships from World War II and the Korean War. They were originally stored in Suisun Bay with the idea that they could be reactivated for emergency wartime use. But the ships slowly decayed—leaking fuel, rusting, collecting invasive species, and shedding metals and toxic paint. The fleet gradually became unsalvageable and turned into a floating toxic waste dump, releasing an estimated 20 tons of contaminants into Suisun Bay and San Francisco Bay.

Baykeeper, along with Arc Ecology and Natural Resources Defense Council (NRDC), sued the federal government to require the cleanup of the fleet in 2007. Pollutants in the mud directly below the Ghost Fleet were found to be in concentrations that exceeded California’s hazardous waste toxicity criteria. The pollution levels from the Ghost Fleet were high enough for bottom-dwelling species, like green sturgeon and Sacramento splittail, to be harmed and for the toxins to be introduced into the Bay’s food chain. 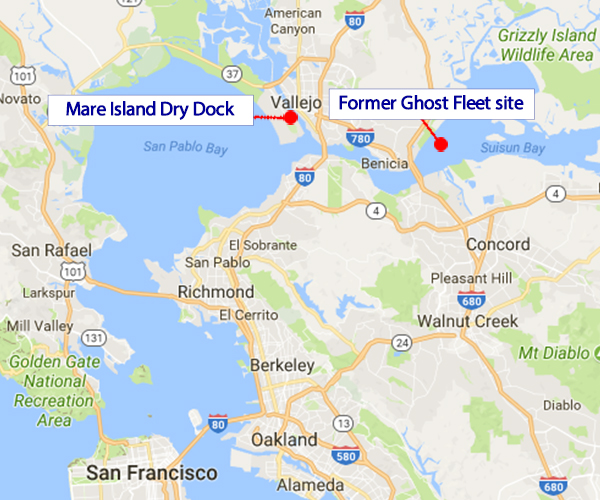 A lot of wildlife was exposed to those toxins. Suisun Bay and the adjacent Suisun Marsh—the largest brackish marsh on the West Coast—provide critical habitat for several species of endangered fish, including Chinook salmon and Delta smelt. The wetlands in the area are home to hundreds of native bird species, and they are an important feeding stop for thousands of migrating water birds each year.

Baykeeper’s agreement with the federal government required measures that went beyond national environmental requirements, to better protect San Francisco Bay. For instance, Baykeeper required the federal government to first remove paint chips and metals from the decks of all 57 ships. Over 140 tons of paint and rust chips were collected in large barrels and taken to a hazardous waste disposal facility.

The government was also required to clean the hulls in dry docks in order to remove invasive species and peeling paint without harming the Bay. And they had to implement annual storm water pollution controls, like water filters and maintenance sweeping, to keep rain from sending more contaminants into the Bay.

Additionally, the government had to come up with a schedule to remove the ships in the worst condition first, in order to clean up the most urgent pollution threats as quickly as possible. As a result of these measures, the ongoing pollution was significantly reduced during the seven-year ship removal process.

Representatives from Baykeeper, Arc Ecology, NRDC, and the Regional Water Quality Control Board conducted an on-site inspection each year. Each time we found problems with some of the remaining ships our recommendations for improvements in pollution control were followed.

Most of the ships that were removed have already been dismantled and recycled. Some were dismantled locally at a former naval shipyard on Mare Island.

In late July 2017, the last two ships, the Cape Borda and the Cape Breton, were transferred to Vallejo’s Mare Island Dry Dock for an initial cleaning. From there, they traveled to Texas to be fully dismantled and recycled for parts.

Since the cleanup began, more surplus military ships have been transferred to Suisun Bay for storage. The federal government is now required to comply with the Clean Water Act and use pollution controls to prevent contamination from these additional surplus ships while they are stored in the Bay. And as a result of our legal action, the government indicated they will also apply the same Clean Water Act controls they agreed to in San Francisco Bay on mothballed ships nationwide.

Experts estimate that the cleanup and removal of the Ghost Fleet has prevented 50 tons of heavy metals from being blown and washed into the Bay. It’s a major victory for a healthier San Francisco Bay ecosystem.

The Ghost Fleet Haunts the Bay No More

The Ghost Fleet of Suisun Bay—57 decaying military ships that poisoned the San Francisco Bay ecosystem for 40 years—is finally gone. The last ship was towed out of the Golden Gate in August, on its...
September 5, 2017

Only three ships are left from the Ghost Fleet of Suisun Bay—the decaying military ships that poisoned the San Francisco Bay ecosystem for 40 years. Baykeeper legal action led to a federal government...
August 7, 2015
Join us to hold polluters accountable and defend the Bay DONATE NOW >