200+ costumed swimmers, paddlers, and boaters will parade on the water in a colorful "kayak-tivism" event to protect San Francisco Bay.

The high point of the Bay Parade is the finale, which features a huge colorful display, with a large banner lifted by kayaks and paddlers in fun Bay-themed costumes. A pod of swimmers and boaters will also join, along with a giant inflatable salmon. The San Francisco Fire Department will provide a fireboat with a water cannon to add to the festivities.  The SF Giants, who are hosting the Marlins at 1:05pm that day, will show the parade on the stadium Jumbotron at the start of the game.

Prior to the finale, 200 swimmers, kayakers, stand-up paddle boarders, and boaters will parade on the water along the San Francisco waterfront to McCovey Cove. The day’s events also include a competitive 6.5-mile “Golden Rivet” Swim starting at the Golden Gate Bridge and ending at McCovey Cove, with 6 solo swimmers and 42 relay swimmers.

BACKGROUND: Photos of Bay Parades past, and of similar “kayak-tivism” in Puget Sound: https://drive.google.com/drive/folders/0B7N2e16Qi28BUmFWdzJibzdGVzA?usp=sharing

ABOUT BAYKEEPER: Baykeeper uses science, advocacy, and the law to stop pollution in San Francisco Bay. We are the only organization regularly patrolling the Bay for pollution by boat. For more information, visit baykeeper.org. 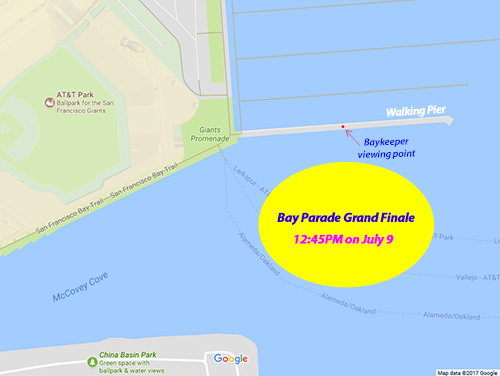