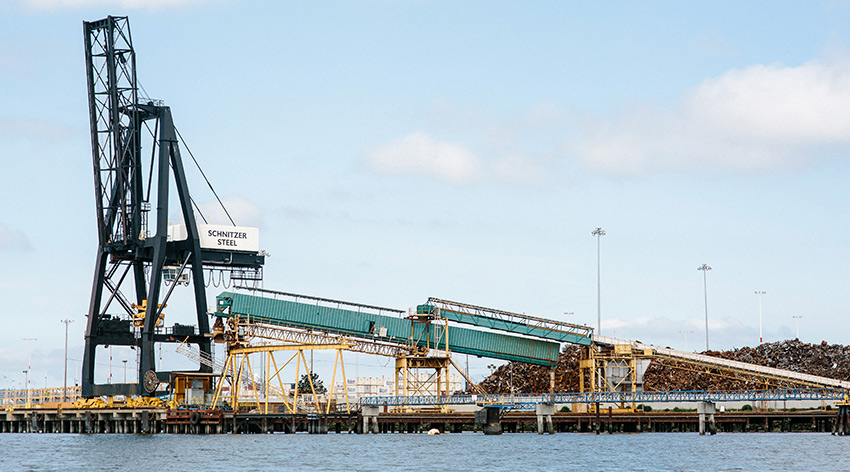 Hazardous pollution from these facilities contaminates communities around California

Filed by Communities for a Better Environment (CBE), Center on Race, Poverty and the Environment (CRPE), San Francisco Baykeeper, and NRDC (Natural Resources Defense Council), the brief alleges that the state has failed to protect local communities from harmful pollution from Schnitzer Steel’s shredding facility’s pollution in Oakland, California and other facilities in the state.

“DTSC has a long history of failing communities near toxic facilities,” said Ingrid Brostrom, Assistant Director at CRPE. "The department's lax regulation of this inherently dangerous industry is yet another example of why we need to hold DTSC accountable to its public health mission."

“Metal shredding operations are sited predominantly in low-income communities of color—like Wilmington, Southeast Los Angeles, and Richmond—disproportionately impacting residents who already bear the unacceptable pollution burdens,” said Shana Lazerow, legal director at CBE. “Failure to meaningfully regulate the industry is just one more symptom of the entrenched environmental racism that is at fault for unacceptable levels of pollution-linked disease and death, including COVID’s shocking toll, in California’s Black and Latinx communities.”

“Baykeeper’s field team has identified Schnitzer Steel as one of San Francisco Bay’s worst industrial polluters for decades—I've personally been on patrol in the Oakland Estuary and witnessed pollution from this site while on our patrol boat. Despite years of legal advocacy, agencies have failed to provide effective oversight and the company has refused to clean up its act. Baykeeper is now asking the court to force DTSC to get serious about protecting our local communities from bad actors like Schnitzer and to bring welcome relief to the people and wildlife of West Oakland, where there's already too much industrial waste and urban pollution," said Sejal Choksi-Chugh, executive director at San Francisco Baykeeper.

“Schnitzer Steel and metal shredding facilities across the state have been allowed to pollute communities with dangerous contaminants for long enough,” Lauren Phillips, attorney at NRDC said. “The State must ensure that these facilities aren’t given free passes to pollute and harm local communities.”

Schnitzer Steel produces 200,000 tons of metal residue per year that contaminates the surrounding air, water, and soil, creating health risks for the surrounding community. The pollution discharged from the facility fails to comply with the DTSC’s own Hazardous Waste Control Law, though DTSC has ignored this noncompliance for over 30 years. Schnitzer is one of six facilities DTSC has exempted, all of which are located in communities that suffer greater pollution burdens than California at large.

The filing of the amicus brief follows the re-introduction of Assembly Bill 1 by Assemblymember Christina Garcia, which reforms the Department of Toxic Substances Control (DTSC) to better protect public health. AB 1 includes reforms to make DTSC more transparent, accountable, and protective of public health, including the creation of a governing board to oversee DTSC's performance.

The Center on Race, Poverty & the Environment is a national environmental justice organization providing legal, organizing, and technical assistance to grassroots groups in low-income communities and communities of color.

Founded in 1978, Communities for a Better Environment (CBE) is one of the preeminent environmental justice organizations in the nation. The mission of CBE is to build people’s power in California’s communities of color and low-income communities to achieve environmental health and justice by preventing and reducing pollution and building green, healthy and sustainable communities and environments.

NRDC (Natural Resources Defense Council) is an international nonprofit environmental organization with more than 3 million members and online activists. Since 1970, our lawyers, scientists, and other environmental specialists have worked to protect the world's natural resources, public health, and the environment. NRDC has offices in New York City, Washington, D.C., Los Angeles, San Francisco, Chicago, Bozeman, MT, and Beijing. Visit us at www.nrdc.org and follow us on Twitter @NRDC.

San Francisco Baykeeper defends the health of San Francisco Bay and Bay Area residents from toxic pollution and the effects of climate change. Since 1989, Baykeeper has held polluters accountable through science, advocacy, legal action, and Bay patrols by air and water. Visit us at www.baykeeper.org, and follow us on Twitter at @SFBaykeeper.