San Francisco Baykeeper has successfully settled our three-year lawsuit to clean up the more than 50 toxic, decaying Ghost Fleet ships currently anchored in Suisun Bay, an important habitat for birds migrating along the Pacific Flyway and for young salmon, smelt and sturgeon.

Under our agreement, the federal government will permanently remove the ships by 2017, removing the worst ships first, and clean up the toxic peeling paint from the vessels' exteriors within the year.

Read more about Baykeeper's victory to clean up the Ghost Fleet.

As Rain Continues, So Do Sewage Spills 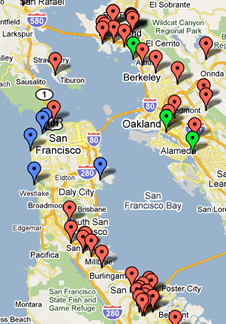 Winter rains continue to inundate the Bay Area, resulting in more sewage spills to the Bay. Since January, nearly 460,000 gallons of raw sewage have spilled from more than 450 sewer pipe failures across the Bay Area. 173 million gallons of undertreated sewage were discharged to the Bay from East Bay cities, including one million gallons on April 11 during last weekend's rains.

In the ongoing struggle to reduce record-high Delta water diversions in order to protect California's salmon and smelt, the National Academy of Sciences recently concluded that the reductions are scientifically justified to save the fish. The scientific review was ordered last year after farming interests opposed the new restrictions.

And in our longstanding court battle to protect California's salmon and smelt, the judge recently rejected another argument to turn the pumps back on. Baykeeper and partners will continue to fight off appeals from farming interests to increase water diversions that harm Delta fish.

Read more about Baykeeper's work to protect California's salmon and smelt from overpumping in the Delta.

Speak Up for New Wetlands in San Jose 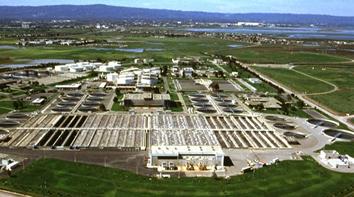 The City of San Jose is currently considering how best to use the 2,600-acre site of the San Jose/Santa Clara Water Pollution Control Plant. Possibilities include a state-of-the-art treatment facility that could help reduce Bay pollution as well as returning some of the site to natural wetlands and wildlife habitat.

Attend one of five community meetings in May to give your feedback and speak up for healthy Bay in San Jose. Visit www.rebuildtheplant.org for more information. 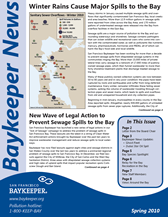 Baykeeper's Spring 2010 newsletter is arriving in member mailboxes now. It has updates on all our latest efforts, including our recent lawsuits against sewage polluters, our initiative to improve oil spill regulations, monitoring recreational use in the Bay and much more. Click here to view our newsletter online, or become a member today to receive copies by mail.

Donate to San Francisco Baykeeper to support a healthy, thriving San Francisco Bay. Since 1989, we have been the Bay's pollution watchdog, strengthening clean water laws and holding polluters accountable. Support our efforts to protect the Bay with a contribution to our work