Should local salmon be pushed to extinction? Should some Bay Area residents pay much higher water bills? Should San Francisco Bay be contaminated with toxic pollutants?

My guess is that Bay Area readers would answer these questions with a resounding “no,” but these scenarios will become reality if the two 30-mile water tunnels proposed by Governor Jerry Brown are built.

The tunnels have a new name since they were first proposed in 2012: the California Water Fix. These massive tunnels would divert more fresh water from the Sacramento River for transport to the Central Valley and southern California, mostly to be used to grow crops for export. But even under the new name, they would still cause major harm to San Francisco Bay, and to the recreation, jobs and wildlife that depend on a healthy Bay. 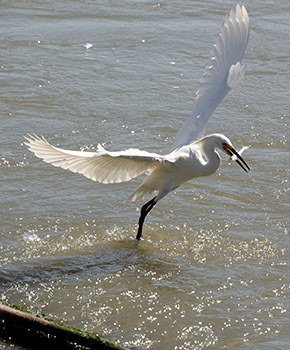 The Sacramento and San Joaquin Rivers both flow to the Delta. The Delta, in turn, flows to San Francisco Bay. The mix of fresh water with ocean water that flows in from the Golden Gate makes the bay ecosystem a rich environment for birds, fish, seals, sea lions and other wildlife.

The fresh water that San Francisco Bay receives is critical to maintain the delicate balance of the Bay’s ecosystem. But for decades, massive amounts of fresh water have been pumped from the Delta for use locally and farther south in the state. So much fresh water is already being taken that there’s not enough to protect the Bay ecosystem and the wildlife that depends on it.

The proposed tunnels would further starve the Bay and Delta of fresh water. The proposal would cause an increase in toxic algae that can be lethal to wildlife. Concentrations of pollutants like mercury and selenium in the Bay, which are already high enough that people are warned not to eat certain fish caught in Bay waters, would rise even higher. Scientists predict that several species of native fish would go extinct.

Local jobs would also disappear. According to the Pacific Coast Federation of Fishermen’s Associations, local salmon would face extinction, threatening thousands of jobs that depend on healthy salmon runs. Global climate change could make it all worse, by reducing fresh water from the Sierra snowpack.

The twin tunnels will cost up to $67 billion and take 15 years to build. Water agencies that use water from the Delta would pay for the tunnels, ensuring higher water bills in places that include Santa Clara County—for decades to come.

The tunnels are being hyped as a “fix” to alleviate drought. But they would be too late for the current drought, or even the next drought. There are better ways to meet California’s water needs than an expensive infrastructure project of questionable value. Cities can capture rainwater where it falls, and store it for reuse later. Fixing all the leaks in California’s urban water systems would increase the state’s water supply by 10 percent, at a fraction of the cost of the twin tunnels. And our state can make more and better use of water recycling, water conservation, and water-saving irrigation technology.

As the Delta tunnels proposal goes through permit processes, Baykeeper is taking every opportunity to advocate for San Francisco Bay over this harmful, costly project.

Photo by Robb Most.