Sejal Choksi-Chugh
From the November 2019 edition of Bay Crossings 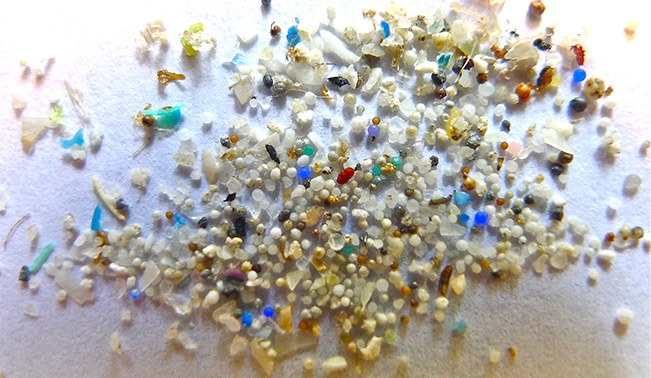 Once these tiny pieces are in the water, they never go away. They just break into smaller and smaller pieces. Microplastics range from the size of a popcorn kernel to smaller than a grain of salt.

Some plastic particles sink into the mud on the Bay floor. Others float near the surface, where tides slosh them repeatedly around the Central Bay and in and out the Golden Gate. Sadly, microplastics also end up in a lot of Bay wildlife.

The Bay is one of the worst microplastics-contaminated waterways in the country, according to a new study released by the San Francisco Estuary Institute and 5 Gyres. More than a third of Bay fish that researchers caught had microplastics in their digestive tracts. When birds, seals, and other wildlife eat these fish, they eat the microplastics, along with any toxins the microplastics have absorbed, like flame retardants and pesticides.

Microplastics get washed into the Bay by rain flowing from Bay Area streets and storm drains. These tiny particles are broken-down pieces of plastic take-out containers and utensils, plastic bags, plastic food wrap, and cigarette filters. Surprisingly, nearly half are black and rubbery, shed onto roads by tires.

The Bay Area's 40 sewage treatment plants also discharge microplastics into the Bay. Current wastewater treatment technology doesn't remove things like bits of synthetic fiber that come off clothing in a washing machine, or fragments of baby wipes that were flushed down toilets.

The good news is that microplastic pollution can be stopped, with the right changes in laws and policies.

Baykeeper is supporting urgently-needed laws that phase out single-use plastics and packaging. We're also advocating for Bay Area wastewater treatment technology to remove small pollutants.  And we’re working for tougher requirements on city governments to keep trash from running into the Bay via storm water.

One of the most effective solutions to prevent microplastics from reaching the Bay could be green infrastructure. For example, rain gardens and permeable paving keep contaminated rainwater out of storm drains that empty into the Bay. Instead, the water is absorbed into the ground, where pollutants like microplastics get filtered out before the water reaches the Bay.

Baykeeper recently secured a landmark legal agreement that requires the city of San Jose to use green infrastructure to keep contaminated rainwater from entering the Bay. Now, we're about to challenge other cities to do the same. We've focused so far on South Bay cities, where researchers are finding the highest concentrations of microplastics in San Francisco Bay.

Each one of us can also take action to prevent microplastic pollution. We can avoid buying products packaged in plastic. We can bring reusable containers to restaurants for takeout food and leftovers. We can support an increase in our local sewer rates to finance equipment upgrades that will keep microplastics out of the Bay. And we can vote yes when our city proposes green infrastructure bond measures.

Baykeeper helped conduct this groundbreaking microplastics research. Our scientists took our partners out on the Bay in our patrol boat, trailing a device that skims the water, trapping tiny particles. And we'll keep working to end big pollution from tiny plastics in San Francisco Bay.

More Plastic than Fish?
You Can Help Stop Microbead Pollution in the Bay
Defending the Bay from Microplastics
California Assembly Votes to Ban Plastic Microbeads in Consumer Products
Trawling for Plastic in the Bay