Tiny Owls Cling to Survival Along the Bay’s Shore

Deb Self
From the February 2014 edition of Bay Crossings

If you’re on the San Francisco Bay shoreline and spot a small, round owl on the ground, it’s probably a burrowing owl. These long-legged birds weigh just 4 to 9 ounces, and are the only owl active on the ground during the day. They have brown spotted feathers and bright yellow eyes.

The most likely place to find a burrowing owl is beside a ground squirrel’s abandoned burrow. Ground squirrels may be scampering nearby, sharing the territory without bothering the owls. Neither creature eats the other. Burrowing owls (Athene cunicularia) eat insects, mice, and small lizards. 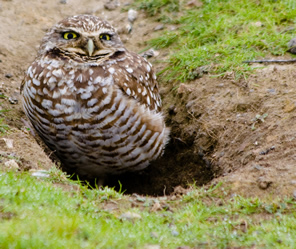 A small number of burrowing owls, mostly female, are spending the winter now at East Bay shoreline parks. They arrived in October from as far away as Idaho, while most of the males have stayed closer to home. By April, the females will fly back north to raise chicks. At Mountain View Shoreline Park along the South Bay, about 15 burrowing owls live year-round and raise their young. Another 40 live at nearby NASA Ames Moffet Airfield, where the staff protects land for the owls.

Burrowing owls tend to make their homes at the Bay’s shoreline parks because that’s where ground squirrels are, and the owls depend on the squirrels for their burrows, according to Mike Lynes, Executive Director of Golden Gate Audubon Society. Ground squirrels thrive in shoreline parks because visitors feed them, and the parks are generally built on former dump sites covered with fill that allows for easy burrow digging.

Before the Bay Area was developed, coastal prairie ringed the Bay, providing one of California’s four primary burrowing owl nesting areas. But as the coastal prairie has been paved over and built on, the Bay Area’s once-large population of burrowing owls has dwindled. These owls were formerly abundant throughout the western US and Canada, but their habitat has been converted to farmland and housing, and they have been gradually disappearing. In California, burrowing owls are designated as a Species of Special Concern. This means they get some protection, to keep them from becoming so scarce that they face extinction, but less protection than if they were declared endangered.

Because burrowing owls often get displaced when land is developed, Baykeeper advocates for burrowing owl habitat to be protected when construction is planned along the Bay’s shoreline. For example, the city of San Jose is planning to develop open space surrounding its sewage plant. Baykeeper recently joined with other environmental groups to urge the city council to save the site’s burrowing owl habitat. We won protection for some of the habitat—but the South Bay burrowing owl population would have a better chance for recovery if more of the land were left undeveloped.

You can help burrowing owls survive by admiring them from afar. When humans get too close, the owls waste precious energy trying to escape. If you take a dog to a park where burrowing owls live, you can help by keeping your dog on leash and away from the owls’ area. You can also help by not using rat or mouse poison for rodent control. Eating a poisoned mouse can kill an owl.

Burrowing owls will be wintering through March at East Shore State Park, Cesar Chavez Park, and the Tom Bates Sports Complex in Berkeley and at Martin Luther King, Jr. Shoreline Park in Alameda. Docents from Golden Gate Audubon Society sometimes show visitors at these parks where to look. Burrowing owls are also seen on the Mountain View Shoreline Park golf course. And there may be other Bay shoreline sites, as yet undiscovered, where you can glimpse one of these rare little owls, standing alert at the opening of her burrow.

VOTE NOV 3! Our wildlife needs someone who will stand up to polluters & Big Ag.
New Shoreline Development Under the Shadow of Chevron
Good Choice, Alameda! Replace Pavement with a Healthy New Wetland
Sharks of San Francisco Bay
A Zombie Sighting in SF Bay
Ensuring Endangered Species Habitat is Safe From Sea Level Rise