Taking a Stand for Your Sand

A multinational corporation is mining sand from the bottom of San Francisco Bay and selling it for a profit. But the Bay’s sand belongs to you and me. And taking sand out of the Bay harms Dungeness crab, San Francisco’s Ocean Beach, and other Bay Area beaches and wetlands. 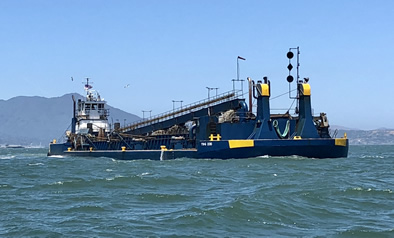 One main area where companies mine sand lies between the San Francisco waterfront and Angel Island. Young Dungeness crab travel there along the Bay bottom toward the Golden Gate on their way to the Pacific Ocean, where they live out their lives. But strong suction from sand mining equipment can interfere with the crabs’ path. Other important species, including sturgeon, also migrate through this area, and sand mining can impact them, too.

Moreover, removing sand from the Bay reduces the supply of sand for Ocean Beach, which is rapidly eroding. This erosion destroys the habitat of the snowy plover, an endangered shorebird, and threatens a major San Francisco sewer pipe and the Great Highway.

This natural resource has moved through the Bay for centuries. Sand washes down riverbeds from the Sierra Nevada, through the Sacramento-San Joaquin Delta, and into the Bay, where it is joined by sand from Bay Area rivers and creeks. Some sand stays in the Bay, some accumulates on the Bay’s shorelines, and some washes out the Golden Gate. Currents carry sand mostly south from the Golden Gate, where it helps build up Ocean Beach and beaches down the coast.

But for decades, the California state government has allowed private companies to interrupt this natural process. The companies are allowed to remove far more sand from the Bay than naturally washes in. Lehigh Hanson, Inc., is currently allowed to harvest 1.5 million cubic yards of Bay sand per year. The company sells the sand to make cement and concrete used for buildings, parking lots, and roads. But other sources of sand for these uses are readily available.

Baykeeper has stood up to protect the Bay’s sand for more than six years. We advocated before regulatory agencies for lower limits on sand mining, and the agencies cut it back by 25 percent. But that’s not enough. According to the California Coastal Commission, to protect coastal beaches, a reduction of 85 percent is needed.

So our attorneys also went to court to fight for the Bay’s sand. Last month, the California Court of Appeal unfortunately ruled that the current unsustainable rates of sand mining can continue for five more years.

However, the Court also expanded the law, saying the sand belongs to the public and making it harder for state agencies to give our natural resources away to private companies. This important ruling could help reduce harmful mining in any California lake, river, stream, or in coastal waters.

And Baykeeper is not giving up. When the sand mining leases come up for renewal, we’ll be there, armed with this legal precedent and sound science that shows the Bay needs more sand. We’ll keep fighting until we stop the harm to the Bay, wildlife, and local beaches—and end the misuse of this important resource that belongs to us all.