Sturgeon: Quiet Giants of the Bay 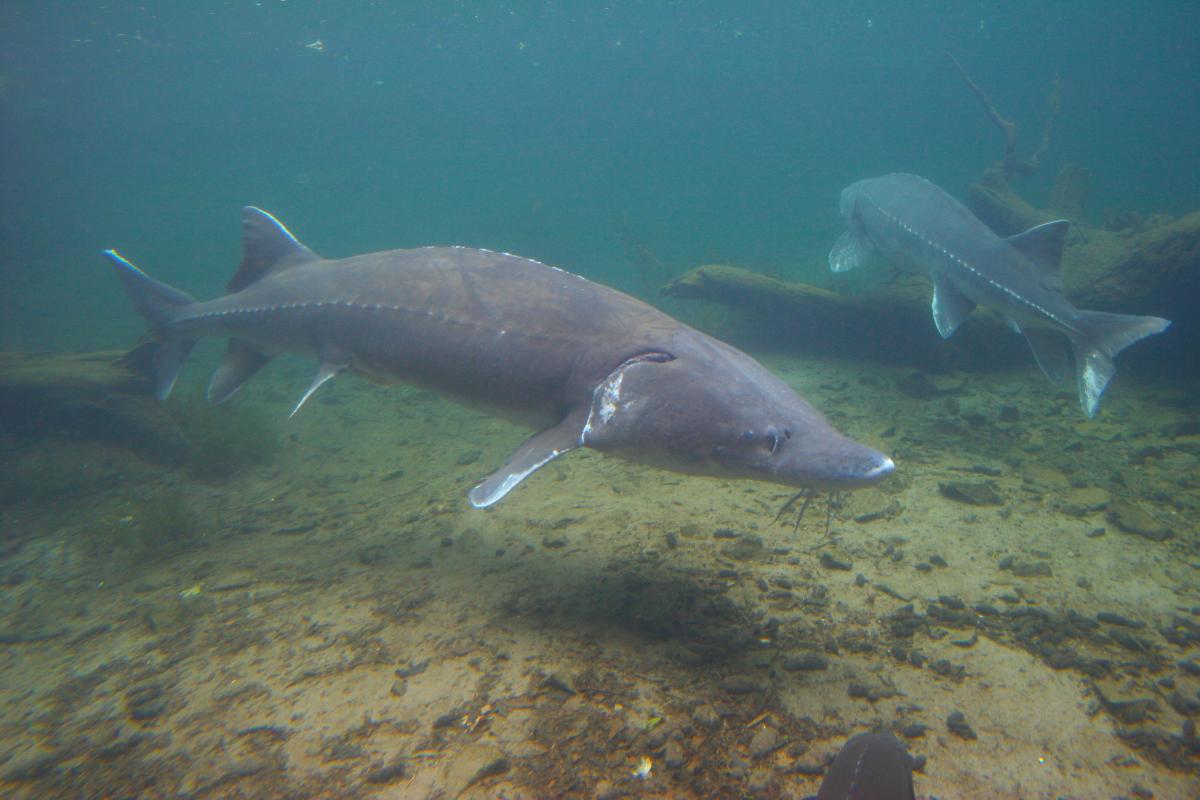 Compared to some of our wild neighbors around the Bay Area, we’re all newbies to California. Sturgeon have swum in our local waters for more than 2 million years. These giant fish can grow even larger than San Francisco Bay’s biggest mammal, the sea lion. But because sturgeon stay far underwater along the Bay’s dark floor, few people ever see one.

The white sturgeon is a homebody and stays in this area its entire life, which can be as long as 100 years. Green sturgeon spend their first three years here and then swim the Pacific Ocean for up to 60 years, returning only to spawn. Both species spawn upstream from the Bay in the Sacramento River. Unlike salmon, which spawn just once, sturgeon spawn many times during their long lives.

Instead of scales, sturgeon have rows of bony plated armor called scutes that protect them from predators. Several specialized organs allow them to locate their main food, small fish and shellfish, in murky water along the Bay floor. These organs include taste buds outside of their mouths, long dangling feelers, and electrical sensors.

After surviving here for millions of years, sturgeon have been hit hard during the past century and a half. Populations have been harmed as dams block access to former spawning rivers and Bay fill and shoreline development take away large areas of habitat.

Overfishing has also been a historic problem. In the late 1800s, the fishing industry almost killed off the Bay’s white sturgeon for caviar. Commercial fishing for white sturgeon in the Bay has been banned ever since. Strictly limited recreational fishing of white sturgeon is still allowed, and occasionally a fishing team will land a 400-500 pound fish. Green sturgeon are even more scarce; it’s illegal for anyone to catch them.

And pollution, of course, also impacts sturgeon. Fishing for and eating Bay sturgeon isn’t actually a healthy choice, because toxic substances accumulate in their bodies. California health officials advise women of childbearing age and children to not eat any sturgeon at all because of the contamination.

Parts of the Bay where sturgeon live are hotspots for one particularly harmful pollutant, selenium. In trace amounts, selenium is a necessary nutrient for both fish and people. But excess selenium can cause deformities, interfere with reproduction, and kill fish. The endangered green sturgeon is especially vulnerable to selenium poisoning. And sadly, an invasive clam from Asia that arrived in the Bay in the 1980s accumulates more selenium in its tissue than native shellfish. This clam has become a primary sturgeon food source.

A significant amount of selenium pollution comes from the Bay Area’s five oil refineries, which have permits to discharge treated wastewater containing selenium into the Bay. Baykeeper is advocating for tighter limits on the amount of selenium refineries can release, to make the water safer and healthier for all the Bay’s wildlife, and especially for this elusive giant neighbor of ours who’s been here for millennia.