Standing Up for the Bay’s Sand 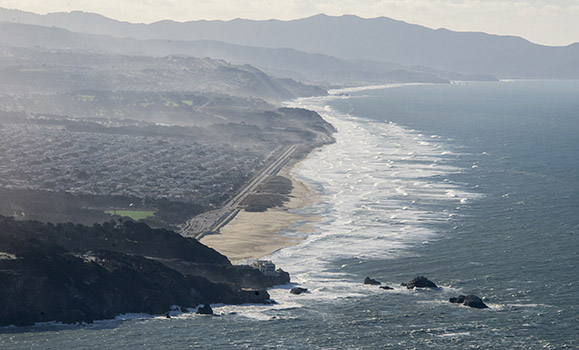 What happens in the Bay doesn’t always stay in the Bay. Case in point: Sand mining companies are digging up too much sand from the floor of San Francisco Bay, making erosion worse at San Francisco’s Ocean Beach. The erosion threatens sensitive shorebird habitat, a major sewer line and the Great Highway.

Excessive sand mining causes harm inside the Bay, too. One major sand mining area lies between the San Francisco waterfront and Angel Island, on the Dungeness crab migration route. Half-grown crabs crawl on the Bay bottom toward the Golden Gate on their way to the Pacific Ocean, where they’ll live out their lives. With the crab season called off this year because of contamination with toxins from algae, sand mining dredge machines may compound the damage by suctioning up the young crabs’ pathway. Other important species, including sturgeon, also migrate through this area.

Sand is a natural part of the San Francisco Bay ecosystem. For centuries, sand has flowed down from the Sierra Nevada, moved through the Sacramento-San Joaquin Delta and washed into the Bay, where it was joined by sand from other rivers and creeks. Some sand stayed in the Bay and some washed out the Golden Gate. Currents carried the sand mostly south, where it helped build up Ocean Beach and beaches down the coast.

A California government agency called the State Lands Commission provides leases that allow companies to mine sand from the Bay floor. For decades, these companies have been allowed to pull up millions of tons of sand each year, far more than flows into the Bay. The sand is an ingredient of concrete used locally for roads, bridges, parking lots and buildings. But alternative sources of sand are readily available.

Mounting scientific evidence connects excessive Bay sand mining to coastal erosion. The 10-mile stretch between southern Ocean Beach and Point San Pedro near Pacifica is eroding faster than any other section of coastline in California, according to U.S. Geological Survey scientists. But despite this harm, in 2012, the State Lands Commission approved a dramatic increase in the amount of sand being taken out of the Bay each year.

Baykeeper sued to stop this increase in sand mining. While our lawsuit moved through the courts, we urged regulatory agencies to put the brakes on the extraction of sand from the Bay. The regulatory agencies cut it back by 25 percent, but that’s not enough. According to the California Coastal Commission, to protect coastal beaches, a reduction of 85 percent is needed.

Sand mining isn’t the only problem. Baykeeper is also challenging harmful dredging methods that rob the Bay of sand and mud that could be better used to protect wetlands and wildlife habitat. I described this in my column “A Better Way to Dredge the Bay” in the August 2015 issue of Bay Crossings.

We fought our lawsuit against excessive sand mining all the way to the California Court of Appeal. Late last year, the court ruled that the State Lands Commission has to start over and set new limits on sand mining, based on a duty to protect this resource for the public’s benefit. Baykeeper hopes the commission will set sensible sand mining limits that protect important species and Ocean Beach. If they don’t, we’ll keep up the fight until they do. To learn more about Baykeeper and support out work, visit our website at baykeeper.org.

Photo by Robb Most. Thanks to LightHawk Conservation Flying.