Show the Bay Some Love on Coastal Cleanup Day

On Saturday September 15, International Coastal Cleanup Day, thousands of Bay Area residents will head to local beaches to pick up trash. But many people don’t realize that San Francisco Bay’s shoreline is part of the coast. In fact, there’s often more trash accumulated along Bay shoreline than on Pacific Ocean beaches, but fewer volunteers at Bay cleanup sites. 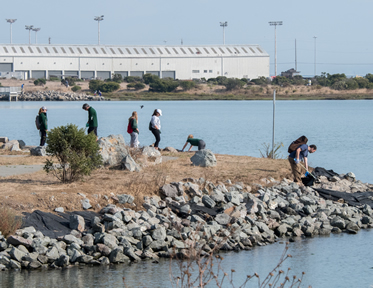 So consider putting your love for San Francisco Bay into volunteer action this Coastal Cleanup Day. Cleanups are scheduled at over 100 Bay shoreline sites, with dozens more along creeks that flow to the Bay. There’s sure to be a cleanup near you. Find out more at www.coastal.ca.gov.

And if you want to join Baykeeper’s Bay cleanup, we’ll be at India Basin Shoreline Park, on San Francisco’s eastern waterfront, 9 am-noon. This shoreline is one of the Bay’s worst trash hot spots, because it gets hit with trash from both the surrounding land and the Bay’s tidal movements. During more than a decade hosting cleanups there, our volunteers and staff have kept thousands of pounds of trash out of the Bay.

Keeping trash out of the water is important, because trash, and especially plastic, is one of the Bay’s biggest pollution problems. Trash mars the Bay’s beauty. It poses a hazard for swimmers and surfers. And for wildlife, trash is a matter of life and death. Fish and birds can get tangled up in rafts of trash, or mistake plastic and other debris for food. Some critters die from eating large amounts of plastic.

A big yearly cleanup focuses our attention for a day, but trash gets into the Bay year-round. All over the Bay Area, trash gets dropped on sidewalks, blown from overflowing trash receptacles, and even illegally dumped.

We can all help solve this problem. We can dispose of trash in receptacles that won’t allow it to blow back out. If we’re at a park with full public garbage cans, we can pack out our waste and discard it at home. If the garbage pickup service empties our bins and some trash gets spilled and left on our street, we can pick it up. And kudos to the caring walkers and joggers who pick up trash from their neighborhood streets!

Beyond individual actions, we can take greater action as a community. California passed a statewide ban on single-use plastic bags in 2016. Within a year, plastic bag litter collected on the state’s beaches on Coastal Cleanup Day decreased by 50%. And that steep decline came even after reductions in plastic bag pollution that had resulted from bans previously enacted by many of the state’s cities.

Now, the city of San Francisco is banning another common type of trash that harms wildlife and lasts for decades in water, plastic straws and stirrers. If you live in a community that hasn’t yet banned them, you can still be part of this positive trend. When you order a drink at a restaurant, request that it not include a straw or stirrer.

Going further, we can all urge our city governments to do better at keeping trash out of the Bay. For example, Bay Area cities need to install more large trash capture devices in storm drains, to prevent trash from being washed off streets and into the Bay. And cities can also do a better job of maintaining trash receptacles and preventing trash hot spots. As communities and individuals, if we all commit to doing what’s needed, beloved San Francisco Bay can and will be free of trash.