Baykeeper, along with partner environmental groups and concerned Bay Area residents, has a different vision. And together, we have derailed two major pieces of the oil industry’s strategy for increasing oil refining and transport around San Francisco Bay.

The oil industry strategy includes bringing millions more barrels of oil to the Bay Area by train, on tracks that run near the Bay and through local communities. Some of the oil would be dirty crude from the Canadian tar sands. Some would be highly explosive oil from the Bakken fields in North Dakota. Often, the oil would arrive in unsafe tank cars not designed for explosive substances.

An oil train derailment in the Bay Area could cause a big oil spill into the Bay. And when oil coats birds and other Bay wildlife, it can injure or kill. An oil train accident could also lead to an explosion and fire in a local neighborhood. The risk is increasing. The boom in oil from North Dakota and Canada has already led to more oil being shipped by train across the United States, and train accidents in recent years have spilled more than a million gallons of crude oil into the environment.

In June, a train with 96 tank cars full of crude oil derailed in Oregon along the Columbia River. An oil fire burned for 13 hours, spewing toxic fumes that led to the evacuation of a nearby school. Four cars ruptured, spilling oil that reached the river. And an oil sheen on the river was visible from the air two days later. Columbia Riverkeeper, an organization that works to protect the river the same way Baykeeper works to protect San Francisco Bay, was on the scene to watchdog the response. It immediately advocated for new laws to end the expanding threat of oil trains along the river. 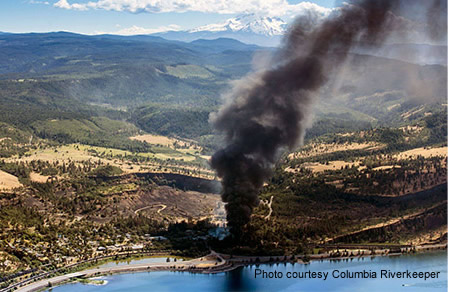 Baykeeper is determined to try to keep an oil spill like this from happening in San Francisco Bay.

In order to bring more oil to the Bay Area by train, oil refineries need to increase their shipping and storage capacity. To do that, they need permits from regulators and government bodies. That’s where all of us who don’t want oil trains near the Bay are taking a stand.

The Valero oil refinery in Benicia recently proposed to expand its rail yard, in order to ship in up to 70,000 more barrels of crude oil in 100 tank cars every day. And this is a refinery that has already had at least one train derailment in 2013.

After months of advocacy from Baykeeper and other organizations, plus steady activism by concerned Benicia residents, the Benicia City Council unanimously rejected Valero’s rail yard expansion in September. This victory means fewer trains will be carrying dangerous crude oil near the Bay.

And in another major victory, late last year, Baykeeper helped stop a major crude oil storage facility proposed for the Pittsburg shoreline. The facility had been a centerpiece of the oil industry’s Bay Area expansion strategy.

We’re not done yet. Baykeeper and other concerned organizations will keep working to protect San Francisco Bay, the Bay’s wildlife, and local communities. To learn more about Baykeeper and support our work, visit our website at baykeeper.org.