Patrolling the Bay by Boat to Stop Pollution

As the shoreline whizzed by and the wind sprayed mist on our faces, I spotted an old building out of the corner of my eye that didn’t look quite right. We were patrolling San Francisco Bay for pollution in the Baykeeper boat, along San Francisco’s eastern shoreline, near Potrero Hill. Our volunteer skipper for that day, Geoff Potter, slowed and pulled closer. The deteriorating structure on a dilapidated pier looked ready to crumble into the Bay.

Back on land, Baykeeper staff investigated further. We learned the shack was possibly contaminated with asbestos, a cancer-causing substance, as well as heavy metals that could be toxic to wildlife and people. We also discovered that the site had a name, Building 64, and that it was owned by the Port of San Francisco. We decided to add it to the active watchlist for our weekly patrols.

A few months later, a big winter storm hit and we noted that more of the shack had plunged underwater. The building now posed a recreational hazard and a possible pollution threat. Baykeeper alerted Port of San Francisco staff and urged them to remove the structure. After some discussion, they agreed to demolish the building and dispose of the debris to keep further contamination out of the Bay. As they waited for city approvals, they placed a boom around the structure to contain materials that might fall into the water.

Some Bay pollution sources aren’t accessible or visible by land, but Baykeeper can find them from the water. When we do, we investigate and follow up to get the pollution stopped. Once we have an agreement to get it stopped, we often go back on boat patrol to monitor the progress.

And that’s what we did in this case. Baykeeper monitored the site by boat to make sure the building was cleaned up and that debris was not contaminating the Bay. When cleanup was delayed, we followed up with Port of San Francisco staff about the reasons and made sure they understood the importance of protecting the Bay from this kind of debris. The shack has since been successfully demolished and removed, in a way that protected the water and shoreline from contamination. And Building 64 no longer threatens San Francisco Bay’s wildlife or swimmers.

Before the day we discovered that shack, we’d passed the site on boat patrols many times, and the building was seemingly intact. That’s one reason Baykeeper patrols the Bay every week. New pollution threats can arise suddenly, and if left unaddressed, they can harm the Bay.

When oil or another toxic substance is spilled in the Bay, Baykeeper takes our boat to the spill site. We monitor at a careful distance to ensure that authorities tasked with response and cleanup are doing everything possible to protect the Bay, wildlife and shorelines. And recently, our scientists, along with our partners at the San Francisco Estuary Institute, also used the Baykeeper boat to investigate harmful levels of microscopic particles of plastic in the Bay’s water.

We can do a lot from a boat to protect San Francisco Bay from pollution. And yet, we’ve also seen that there are some pollution sources that aren’t detectible by boat or land.  That’s why Baykeeper is expanding our pollution patrols—and taking to the air.

Starting in 2018, we’ll be keeping an eye on the Bay from land, water and air! We are excited to be partnering with LightHawk Conservation Flying and a local drone group, Autonomous Imagery, to find and stop even more sources of pollution. 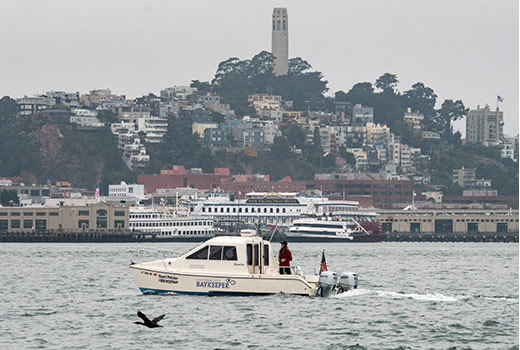