The one where the bad guys went to jail…

I don’t know about you, but I’m feeling a little disappointed that the 50th Earth Day came and went, and it didn't get nearly the fanfare it deserved. Especially at a time when environmental rollbacks are being snuck under the cover of COVID-19, polluters are feeling emboldened to skirt the law, and the climate crisis is taking a backseat to the global pandemic.

For Baykeeper, the first Earth Day marked a beginning. As outrage mounted over the devastating 1969 Santa Barbara oil spill, an estimated twenty million people took to the streets across the country and inspired the creation of critical environmental laws, like the Clean Water Act. Those new laws were the reason Baykeeper came into existence.

On San Francisco Bay in the 1980s, a scientist named Mike Herz was growing increasingly worried about the pollution he was seeing while boating around. He realized the new environmental laws weren’t being enforced against shoreline polluters. And having recently learned about the newly-formed Hudson Riverkeeper—he knew the Bay needed a similar type of citizen watchdog. (Incidentally, Mike also didn’t mind that regular Bay surveillance would require him to spend more time on the water!)

Baykeeper got off to a start worthy of Barbary Coast legend. A tipster to our pollution hotline alerted Mike to a renegade shipyard that was running a clandestine dredging operation.

By night, the company was illegally scooping tons of polluted mud off the Bay floor and dumping it onshore, exposing people and wildlife to toxics. Baykeeper's on-the-water investigators kayaked in the dark to catch them—and after long, cold nights of keeping watch, our scientists and attorneys compiled enough evidence to take legal action.

In the end—even after Baykeeper's patrol boat was ransacked and our monitoring equipment was thrown into the Bay—we brushed off the threats and held the company accountable. The corporation had to pay hefty fines, and its officers went to jail.

And that’s just one story where Baykeeper held the bad guys accountable. Decades later, thanks to the collective action of millions of people that brought about new environmental protections, we still follow Mike’s original vision of being a citizen watchdog for the Bay.

And I’m ever hopeful that in this time of social distancing for public good, we’re creating a new generation of caring citizens that are learning that collective action can make a difference—for our health, for our Bay, and for our planet.

Since we missed being together to enjoy the Bay this special Earth Day, I wanted to share a couple of special stories from our members that show why our collective action to protect the Bay matters more than ever. 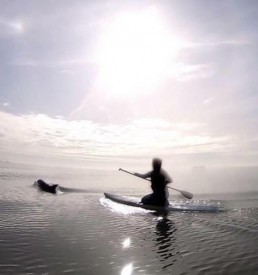 From my pod to yours

On a bright, expansive Thanksgiving morning last year my friend Michael and I headed out from Encinal Beach for a stand-up paddle. It was a beautiful day—calm and still and unseasonably warm. As we paddled out on the Bay we luckily encountered two bottlenose dolphins. At first we watched from a distance—but then they came to us! The four of us moved together on the water, an impromptu pod, with the dolphins gliding gracefully in the boards' wake. I paused and got down on my knees and the large male dolphin started swimming back and forth five inches under my board, pivoting sideways with each pass to get a good look at me!

This was definitely an uplifting spiritual experience. It drove home that we need to see ourselves not as inheritors of the Earth, but as stewards: fierce protectors of the Bay and all the wonderful creatures that depend on it.

Lunch on the wing

One of my favorite days on the Bay was as a tugboat Captain. It was a beautiful calm spring day. I had the wheel house doors open and was enjoying the afternoon breeze. I had finished a job in Martinez and was headed to another in Richmond.

Along about Echo buoy something appeared in my peripheral vision. I looked to my left and there was an osprey, gliding on the updrafts my boat was making, with a big fish in its talons. It looked as though it needed the updraft to stay in the air, the fish was so heavy. It stared at me for about 15 seconds then gained more altitude then veered off toward Pinole Point, the nearest land. It was just the two of us out there for just a few moments, priceless.

Photo of Sejal by Gail Odom