Sejal Choksi-Chugh
From the May 2019 edition of Bay Crossings

A new proposal by the Trump administration poses a big threat to San Francisco Bay and to local drinking water.

If it’s adopted, the rule would erase Clean Water Act protections for streams and creeks that flow only when it rains or when the winter snow melts. A polluter would be free to contaminate the water flowing in a creek if that creek, during another part of the year, usually goes completely dry.

Protections would also be slashed for marshes that aren’t connected above ground to a stream, creek, or river—even if they connect underground.

How bad would this rule be for San Francisco Bay?  I asked Baykeeper scientist Ian Wren to investigate. He found that over forty percent of the Bay Area’s miles of streams would lose protection under the proposal. 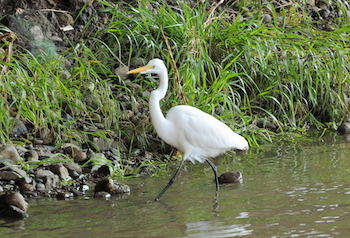 Many of those streams flow to creeks and rivers that eventually lead into San Francisco Bay. Some supply reservoirs that are the drinking water source for millions of people in San Francisco and Silicon Valley. Some are the spawning grounds for endangered fish species, including endangered salmon. And many of the streams and creeks that would lose protection are already threatened by pollution, development, mining, and agriculture.

Without Clean Water Act protections, polluters would have more leeway to dump waste in all of these creeks and streams. Developers could build right next to these water sources—and in some cases, on top of them.

The Clean Water Act, a federal law passed in 1972, has been a monumental force of good for the health of San Francisco Bay. The quality of the fresh water flowing into the Bay from the Delta has been steadily improving since the law was adopted.

The Clean Water Act provides extra strong protections because it empowers nonprofit environmental organizations like Baykeeper to take effective action to hold polluters accountable. The law has been especially significant in reducing visible pollutants in the Bay like raw sewage, oil, and trash.

The Clean Water Act also ushered in a shift in how San Francisco Bay was perceived—from a dumping ground to a protected natural resource.

Before the Clean Water Act, there were signs around the Bay that instructed beachgoers and boaters to throw their trash in the water. The Bay’s stinky odor was notorious. Sewage pollution was so bad that swimmers would get sick from spending time in the Bay.

Thankfully, most of us now understand that we need to be better stewards of our waters. But the Trump administration is only catering to corporate interests. Their short-sighted new rule would reverse a lot of the progress that’s been made protecting the water flowing through the Delta and the Bay.

Fortunately, Baykeeper is part of a nation-wide alliance that’s fighting this harmful proposal. We are a founding member of the Waterkeeper Alliance, one of more than 300 local organizations working for clean water worldwide.

Along with our fellow Waterkeeper organizations across the US, we’re working to put a stop to Trump’s destructive plan. And Baykeeper is also working to strengthen local and state protections for the Bay.

Bills for the Bay
A New Dawn Breaking
Wind in our sails
Passion, patience, and count every vote
Take Action: Save Point Molate
The One Where the Bad Guys Went to Jail…