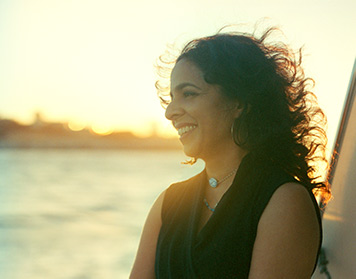 I know. We’re already four weeks into the new year. And you may be wondering if this note is a little overdue. So, I’ll be honest: I've been delaying sending you my best wishes.

The first time I sat down to write you in December, I succumbed to 2020 fatigue. Hope of the vaccine inspired me after the holidays, but California’s pandemic surge felt too troubling. Then my home state elected two champions of environmental and social justice to the U.S. Senate, and uplifted, I sat down to wish you well again, only to be stunned by the white supremacist insurgency at the Capitol.

Now we’re here. And after a rejuvenating inaugural that movingly marked the return of truth, decency, and democracy, I finally feel ready to look 2020 in the rearview mirror and celebrate the rays of light during an otherwise dark time.

This past year, Baykeeper remained the only group that regularly patrolled the Bay for pollution as we logged over 100 hours by boat and drone. We investigated nearly 75 pollution tips reported into our hotline by vigilant Bay Area residents (like you!). We won legal actions that required cleanup of 5 polluting industrial facilities, and we won a ban that will keep more than 1 million tons of toxic coal every year out of Richmond.

We even defeated the Trump administration when a federal judge ruled in our favor in Baykeeper vs EPA to protect 1,400 acres of potential wetlands and buffer South Bay communities from the destructive effects of sea level rise.

This coming year, our work protecting the Bay’s wildlife and communities will be bolstered by an administration that is working with us, not against us. But that doesn't mean our path will be easy. There are still industrial polluters shirking the law, refineries and coal companies trying to expand, and sea level rise threatening to flood toxic shorelines. More than ever, we are bound to our local communities to hold polluters accountable and fight against injustice.

As this new dawn breaks, Baykeeper is up for the fight—and we're grateful to have you by our side. The Baykeeper team extends you a belated Happy New Year. May we all be brave enough to be the light.