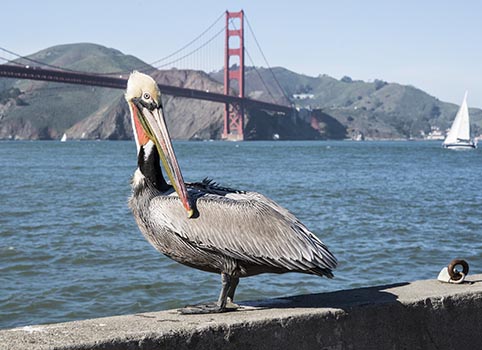 A plastic takeout cup dropped on a Napa street, a food wrapper tossed outside the Giants’ ballpark, cigarette butts stubbed out in an Oakland park—it’s all likely to end up in San Francisco Bay. Trash in the water mars the Bay’s beauty. It poses a hazard for swimmers and surfers. And for wildlife, trash is a matter of life and death. Fish and birds can mistake plastic and other debris for food, or get tangled up in large rafts of trash.

Litter blows into the Bay year-round, but the rainy season is the Bay’s trash nemesis. Rain washes huge amounts of trash off streets, parking lots and other hard surfaces, carrying it into storm drains. Most Bay Area storm drains empty both water and trash into creeks and rivers that flow to the Bay, or into the Bay itself.

We can all help solve this problem. We can dispose of trash in receptacles that won’t allow it to blow back out. If we’re at a park with full public garbage cans, we can pack out our waste and discard it at home. If the garbage pickup service empties our bins and some trash gets spilled and left on our street, we can pick it up. And kudos to everyone who takes their own mugs to coffee shops and reusable bags to stores!

Beyond these small individual actions, we can seek greater collective action to solve the Bay’s trash problem. City and county governments can make a bigger difference. We can encourage our local governments to sweep streets more regularly, and to install trash capture devices. These devices can handle the large volume of water that runs off many streets into a storm sewer during big storms. They separate trash from the water before it gets to a creek or the Bay.

Cities can also do a lot to reduce the amount of rain that rushes off streets, so there’s less water to carry away trash. Streets can be paved with permeable materials that let water percolate into the ground. Gutters, planted medians and curbside areas can be designed to soak up rainwater. Even better are advanced systems that not only absorb rainwater, they collect it, filter it and store it. This provides an added benefit: a backup water supply during the dry season or in time of drought.

Baykeeper advocates for stronger regulations and laws that would require Bay Area cities and counties to do what’s needed to keep trash out of the Bay. We also use the law to reduce trash at the source. Recently, we successfully settled a lawsuit with the City of San Jose—historically one of the biggest sources of trash in the Bay. San Jose has agreed to become a leader in stopping trash pollution. We hope this inspires other cities to do the same.

In addition to Baykeeper’s legal advocacy, we also believe in a good, old-fashioned shoreline cleanup. Saturday, September 17 is Coastal Cleanup Day. Volunteers all over the Bay Area will remove trash from coastal beaches, the Bay shoreline and the banks of creeks that lead to the Bay. I invite you to join Baykeeper staff and volunteers to remove trash from India Basin Shoreline Park on San Francisco’s eastern shore from 9 a.m. to noon. To learn more about the cleanup, click here. Together, we can stop the trashing of San Francisco Bay.