Calling all swimmers, kayakers, stand-up paddleboarders and boaters! You are invited to be part of Baykeeper’s Third Annual Bay Parade on Sunday, May 22.

Join hundreds of other participants for a fun and active day on San Francisco Bay. Swimmers will swim 6.5 miles, solo or in relay teams, along the San Francisco waterfront. Kayakers and paddleboarders will join in for a one-mile paddle. We also need sailboats, motorboats and powerboats to accompany swimmers.

Everyone will come together in the spectacular finale at McCovey Cove. And you’ll make it to the big screen—when the parade finale is broadcast on the ballpark Jumbotron at the start of the Giants’ home game. After the parade, the celebration continues at an after party hosted by Anchor Brewing.

The fastest swimmer, fastest relay team and biggest fundraiser will be engraved on the Golden Rivet Award plaque, beneath a Golden Gate Bridge rivet cast in solid gold. Winners will also be invited to the Giants’ home plate ceremony on the evening of May 22.

See you on the water! Register for the Bay Parade today at baykeeper.org/bayparade. 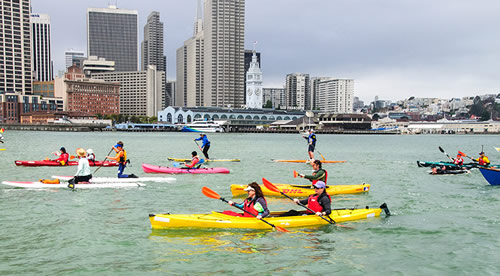 Kayakers and stand-up paddleboarders are invited to paddle along the San Francisco waterfront in Baykeeper’s Bay Parade. 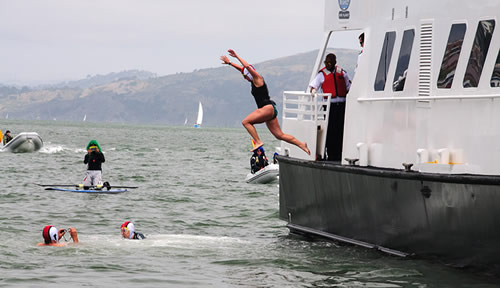 Swimmers will swim along the San Francisco waterfront in Baykeeper’s Bay Parade.

Top photo by Robb Most. Other photos by Robert McKinney