It's Time to Quench the Bay's Thirst

In the past, the Bay was an exceptionally rich environment for wildlife. San Francisco Bay is part of the Bay-Delta estuary, where fresh river water mixes with salty ocean tides. This creates multiple diverse ecosystems that sustain a variety of fish, birds, seals and other mammals, as well as other creatures large and small that live in water, amid wetlands and along the shore. 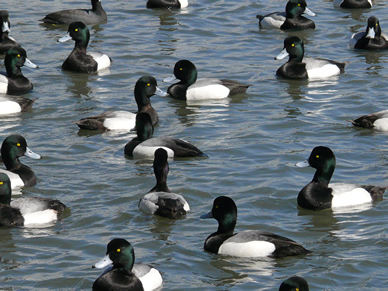 But over the past century, more and more river water has been diverted from the Bay-Delta estuary to irrigate farms and supply cities. That leaves the Bay and Delta thirsty for fresh water.

The estuary’s health and the health of its wildlife depend on fresh water from upstream rivers, according to a recent report by the Bay Institute, “San Francisco Bay: The Freshwater-Starved Estuary.” Fresh water is crucial during winter and spring. Yet in a typical year, California diverts more than half the winter-spring runoff destined for the Bay—and during the current drought, has diverted two-thirds or more.

Robbing the estuary of fresh water also creates ideal conditions for invasive species that harm the Bay’s native species. And it encourages the growth of harmful algae that can choke off oxygen and kill fish and other aquatic creatures.

Recognizing the estuary’s needs, the State Water Board is proposing to increase fresh water from one of the Bay-Delta’s main river systems—the San Joaquin—by 30-50 percent. If this proposal is adopted, more water will flow into the Bay from three San Joaquin tributaries: the Tuolumne, the Merced and the Stanislaus.

The result will be less water for Central Valley agriculture and for cities, including San Francisco. Sadly, San Francisco officials and representatives of agricultural interests have expressed outrage about receiving less fresh water. But in fact, the State Water Board’s proposal doesn’t go far enough. For the Bay’s ecosystem to actually thrive, more is needed.

For example, salmon—star species in the Bay historically—hatch in rivers and migrate when very small to the ocean. They mature and live in the ocean, then return to the river where they hatched to spawn—leaving the eggs of the next generation. The Bay once teemed with salmon hatched in the San Joaquin and Sacramento rivers and their tributaries. A local fishing industry thrived. But now, there’s not enough fresh water in the rivers to support fish spawning. Most experts agree that for wild salmon to thrive in the Bay, it will take more than the proposed increases.

And it’s not just salmon. Virtually all native species in the Delta and northern San Francisco Bay have been hit hard by water diversions, especially during the recent drought.

Instead of limiting the Bay’s fresh water, the Bay Area must rally behind a vision of a thriving Bay and a stronger water conservation ethic. Conserving water intelligently and making more use of recycled water collectively would allow the Bay to have the fresh water it needs. We as a region should also capture more rain that falls right here, store it, and use it during the dry season. And California should use these methods statewide to better balance the needs of its fisheries, wildlife and people.

Baykeeper and environmental groups across northern California are calling for an increase of at least 50-60 percent of river water flowing to the Delta and Bay. That’s the only way to prevent ecosystem collapse, sustain healthy wildlife and restore healthy salmon and other fish populations.