If We Snooze, the Bay Will Lose

I’m not a fan of my morning alarm disrupting my cozy slumber. But to be on time and prepared for my busy day, I need that wake-up call, no matter how jarring.

I write this with similar mixed feelings. No one likes an alarmist, but this new year, all of us snoozing unaware around San Francisco Bay need a wake-up call.

The Bay is already under stress from more than 7 million of us living our lives, running our businesses, and getting rid of our waste. That’s all normal. But local oil refineries are also trying to expand. The coal industry has singled out the Bay Area for toxic exports. And polluting facilities around the Bay are shirking the law.

I’m worried. Unless we heed the alarm, the Bay Area won’t be ready to defend San Francisco Bay during 2019. To deal with the big threats facing the Bay, we all need to be awake.

Phillips 66 plans to more than double their oil tanker traffic across the Bay. This raises the danger of oil spills in the Bay’s waters. The tankers would likely carry tar sands oil, which is heavy and nearly impossible to clean up after being spilled. If spilled in the Bay, it would harm wildlife and smother bottom-dwelling creatures that are critical to the Bay’s food chain. 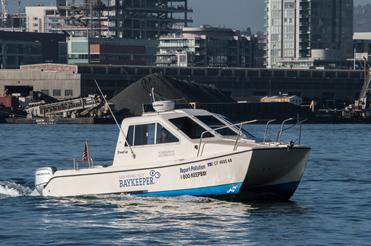 To increase the number of tankers, Phillips needs approval from government regulators. That’s where we can all be prepared. Along with concerned community groups, Baykeeper will advocate against more tankers on the Bay. We’ve stopped two previously proposed Bay Area oil refinery expansions, and we’re determined to stop this one, too.

The coal industry is also targeting the Bay Area. Open train cars carrying coal shed toxic dust near local neighborhoods and along the Bay shoreline. Exporters then load the coal onto big ships in a process that further contaminates the Bay. Coal contains arsenic, lead, mercury, and other harmful heavy metals. The dust is linked to serious illness in people, including asthma and heart disease. In the Bay, shellfish and small bottom-dwelling creatures can consume the coal dust and the toxins move up the food chain.

Another looming threat is undiscovered polluters. San Francisco Bay is surrounded by thousands of facilities that can contaminate the water with toxic industrial runoff, raw sewage, trash, and more. These polluters are supposed to comply with laws that protect us. But those laws are currently being weakened, contain big loopholes, and often go unenforced.

Baykeeper is the only organization that regularly patrols the Bay to find and stop polluters. In the year ahead, our scientists will patrol for pollution on the Baykeeper boat. Our field investigators will inspect the perimeter of suspected polluting sites. When we find pollution, our lawyers will hold the polluters accountable. And if the laws are too weak, our advocates will work to make them stronger.

The biggest threat of all would be if Bay Area residents snoozed through these battles. Instead, we invite you to join the fight and be part of defending the Bay in 2019. To get your monthly wake-up call about the newest threats facing San Francisco Bay, sign up for Baykeeper’s e-newsletter.