A Green New Deal for a Blue Old Bay

Our children’s San Francisco Bay could be much bleaker than the beautiful Bay we all know and love today. 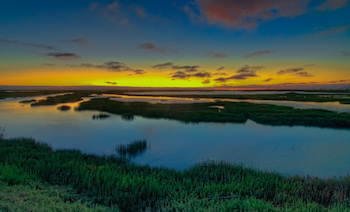 Within their lifetimes, rising water might flood toxic hotspots, industrial facilities, and sewage treatment plants—spreading pollution through the Bay and into neighborhoods. Warming Bay waters will likely cause toxic algae blooms, spread new diseases to plants and animals, and threaten more extinction of native species. Extreme swings between storms and drought could become normal, and harm the Bay.

The Bay Area needs to act quickly to prevent and prepare for these impacts of climate breakdown. And the momentum we need could come from the bold new plan known as the Green New Deal.

The Green New Deal aims to jump-start a massive nationwide effort to mitigate the climate crisis—with the same all-in, can-do visionary approach that achieved feats like landing the first American astronauts on the moon. And it would be good for San Francisco Bay in many ways:

The Green New Deal would not only be good for the Bay, it would also empower Bay Area residents by:

The Green New Deal is a set of principles. The solutions are technologically feasible. But to change course, we all need to see through the denial tactics of polluting corporations, and understand the impending climate collapse as the real crisis it is.

If we all fight for the Green New Deal and begin implementing some of these principles now, our children’s future will look much brighter. Be part of the fight right here—join Baykeeper to defend San Francisco Bay from climate breakdown and other impending threats.