Good News and Possible Bad News for the Bay 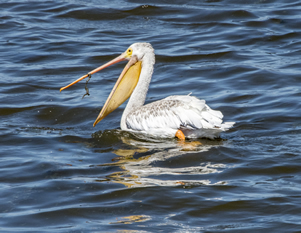 The good news: In November, California voters passed the statewide ban on single-use plastic grocery bags, Proposition 67. The measure succeeded despite the plastic bag industry spending more than $6 million against it. And it won in spite of the industry’s efforts to include Proposition 65 on the ballot to confuse voters about the ban’s funding mechanism.  The state’s voters resoundingly supported the ban without the funding strings attached.

The statewide ban went into effect immediately and is a big win for San Francisco Bay’s wildlife. Because plastic bags don’t degrade quickly, they often drift from streets, dumpsters, and landfills into nearby waters. Seals, fish and birds can become entangled in them and lose mobility, and some critters die of starvation from eating indigestible plastic.

Now, less plastic bag litter will wash into every river, creek and stream that flows to San Francisco Bay, and that also means fewer bags will harm wildlife in the Pacific Ocean.

More good news: back in June, Bay Area voters passed Measure AA. This will result in a Bay Area-wide per parcel tax that will go toward major investments to restore Bay wetlands, protect shoreline communities from future flooding caused by sea level rise and increase shoreline trails and parks.  Measure AA was passed by 70 percent of the voters, in a demonstration of overwhelming support for a thriving, more resilient San Francisco Bay.

But at the national level, the ideas being proposed for a new federal agenda spell uncertainty for San Francisco Bay. The proposals include an increased push to burn fossil fuels, a reversal of climate change policies and a rollback of environmental protections and EPA’s authority.

This new national agenda may mean more oil refining on the Bay’s shore. More oil trains loaded with explosive fuel may rumble through local communities. Less federal support may be available to cope with rising sea levels and climate change impacts on the Bay. And the laws that Baykeeper uses to help protect the Bay Area’s swimmable, fishable waters may be weakened.

In the months and years ahead, Baykeeper is determined to stay focused—and use science, advocacy and the law to keep defending beautiful San Francisco Bay.

And Baykeeper isn’t facing these threats alone. Environmental partners, Bay Area residents, Californians and visitors from all over the world care deeply about the Bay. There’s a wide community on the Bay’s side. This diverse community is willing to take action and adopt initiatives like Measure AA and Proposition 67, so that our children—and our children’s children—will be able to know and enjoy a healthy, thriving San Francisco Bay.

I invite you to join us in fighting the good fight. Stand with us for the planet and for the beautiful Bay in the place we call home.

Photo by Robb Most.