One day in 2011, Baykeeper staff was on a regular patrol of San Francisco Bay in our boat—when we came across something awful.

A shipping terminal on the Richmond shoreline had placed huge, looming piles of dark black material at the edge of the water. Wind was blowing black dust from the piles directly into the Bay. Facility operators were also making a mess in the water while loading the stuff into a waiting ship. And we could see that the next storm would wash toxic dust from the uncovered piles into the Bay. 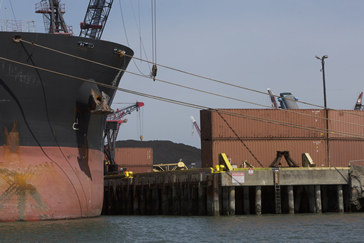 Coal and petroleum coke, two dangerous materials that this facility handles, contain heavy metals such as arsenic and lead, along with other toxins. In the water, these pollutants harm fish and the birds and seals that eat contaminated fish. They also harm people who eat fish from the Bay.

Baykeeper investigated further. We gathered evidence, researched the facility, reviewed reports. And then we sued this polluter for violating the Clean Water Act.

In 2014, we negotiated a legal agreement that required this polluting facility, the Levin-Richmond Terminal Corporation, to install extensive water pollution controls to protect the Bay from coal and other toxic materials.

And Baykeeper’s approach worked. The Levin-Richmond facility implemented those controls and reduced its water pollution from the heavy metals found in coal by 98%. The photo here shows the facility after Baykeeper's legal action, with controls in place to protect the Bay.

We made sure Levin significantly improved their operations so that they don’t pollute the Bay every time they load a ship.  It was a big win for protecting the Bay from industrial water pollution.

While we’ve been holding polluters accountable since our start in 1989, Baykeeper launched this targeted campaign in 2012. So far, we’ve required 44 industrial facilities to stop polluting the Bay.  These have included:

The locations range from Napa and Benicia at the Bay’s north, with sites in San Francisco, Marin, East Bay, and all the way south to San Jose and Sunnyvale.

28 of the 44 facilities have either significantly reduced or completely eliminated their pollution problems. The other 16 facilities are in the process of installing their pollution controls. We’re watching them carefully to make sure they do what’s needed.

And we’re continuing to investigate other industrial facilities around the Bay so we can hold them accountable, too.

Plus, we’re standing strong on the front lines to protect the Bay from coal. Although we reduced water pollution from the Levin-Richmond facility itself, the coal industry is increasingly sending more open train cars full of coal rumbling through Richmond. The cars then sit on railroad tracks in residential and commercial areas, waiting offsite to be unloaded at the Levin-Richmond terminal.

Richmond residents find black, gritty dust on windowsills and cars. That toxic coal dust can cause serious health problems for people. The dust can also get washed and blown into the Bay.

So Baykeeper is working with Richmond city leaders and local community groups to craft an ordinance to protect their residents and the Bay from airborne coal dust.

You can join us to stop industrial pollution in San Francisco Bay. If you see pollution, report it to Baykeeper’s Pollution Hotline. And to support our work, visit us at baykeeper.org.

Above: An aerial view the Levin-Richmond facility.