Fighting Giants Around the Bay 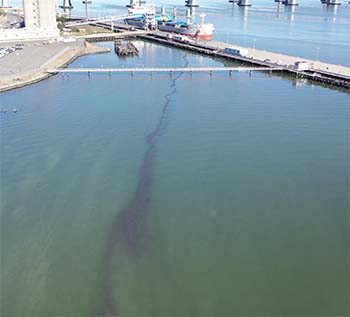 The determined underdog emerges victorious after defeating a ferocious giant. It’s a mythic story that cuts across centuries and cultures. One of the most familiar versions takes place in the valley of Elah over three thousand years ago. And as Baykeeper fights giants around the Bay, it often feels like we’re living the modern-day equivalent of that epic battle.

The corporations and government agencies we face are Goliaths. They're bigger and better resourced than we are, heavily armed with a phalanx of attorneys to fend off legal challenges. But David's victory was not an accident, where the small just happened to prevail over the mighty. His win epitomized the way of the underdog: mustering passion and courage to defend the people, sizing up an opponent’s weaknesses, capitalizing on unique skills, and selecting the right weapon to topple an adversary.

Over our 33-year history, Baykeeper has worked hard to develop these advantages over the big polluters we fight and the agencies we hold accountable.

One of our earliest battles honed our investigative skills when we caught a dredging company illegally dumping polluted sediment in the middle of the night. Our kayak volunteers braved the dark, cold waters of the Bay to collect the evidence we needed to send the polluter to jail—the first time a CEO was convicted of environmental crimes against SF Bay.

We’ve entered the battlefield hundreds of times since that first challenge, bringing down a wide variety of giants who were harming the Bay.

There was the time we caught the federal government ignoring environmental laws to store its mothballed fleet of military ships on the Bay. Toxic paint and chemicals leached off the ships, contaminating the water and poisoning the fish that folks caught at nearby fishing spots. Our litigation partners relied on our staff’s specialized knowledge of the Bay and expertise with local water laws to build a strong case that forced the government to clean up its mess.

More recently, our patrol team witnessed a polluting company dumping toxic coal into the Bay and surrounding neighborhoods. We used the Clean Water Act, our trusty weapon of choice, to hold that deep-pocketed polluter accountable. And after that win we stayed on the battlefield, partnering with Richmond’s frontline communities to defend the people from the fossil fuel industry by passing a permanent citywide coal ban, which our legal staff helped write.

Similarly, we stood up to the corporate giant Cargill, the largest privately held company in the country. We stopped it from paving over 1,300 acres of potential Bay wetlands where the company wanted to build luxury condos. We deployed our strongest attorneys, with the greatest depth of Clean Water Act experience, and built a strategic alliance with local partners and government agencies to take down that behemoth.

And now today, we’re tackling the largest and dirtiest industry around the Bay. Our investigative team spent long days in the field, using our drone to catch both the Valero oil refinery and a Benicia bulk-shipping facility in the act of polluting the Bay and neighboring communities with petroleum coke. And this one’s shaping up to become another epic battle. In response to our recent legal notice, these heavily armored giants have already mounted baseless defenses and attempted to shift the blame. Who knows how this newest challenge will end?

But the one thing you can be sure of is that Baykeeper, as the underdog, will continue to work our advantages. We'll assess our opponents’ weaknesses, select our most powerful weapons, deploy our staff’s expertise, and charge into the fray fired up by our passion to protect the people and wildlife that depend on a healthy Bay.

Oh, and Baykeeper has one very important advantage that David didn’t have. Our secret weapon is having supporters like you by our side.

Here’s to fighting giants in 2022—and winning!