Dirty Dinosaurs Lurking Around the Bay

I try hard to understand the mindset of the people who decided to build dirty, dangerous oil refineries on the gorgeous San Francisco Bay shoreline. 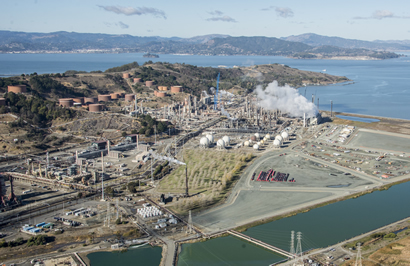 Back 50-100 years ago, the Bay represented a plentiful source of cooling water for refining processes that reach temperatures over 1,000 degrees. The oil industry saw a site where tanker ships could easily deliver crude oil. And the waters were a convenient place to dump toxic waste.

Refineries turn crude oil—the thick, dark liquid pumped up from oil wells—into products that include gasoline, motor oil, jet fuel, and asphalt. Our fossil-fuel dependent culture has relied on these products for decades.

There are five refineries in the north Bay, two in Martinez and one each in Richmond, Rodeo, and Benicia. We still depend on these refineries for now, but they’re relics. For life on our planet to thrive, these dinosaurs must go extinct, supplanted by cleaner sources of energy.

Oil refineries endanger the Bay and local communities in many ways:

Despite these risks, the oil industry wants to expand Bay Area refineries, rather than bring them to extinction. Their goal is to transport millions more barrels of crude oil to the Bay for processing and export to other countries. This would drastically increase the harm these dinosaurs cause.

Baykeeper works to protect the Bay from all the threats posed by refineries.

Along with a coalition of environmental and community groups, we’re standing firm against refinery expansions. We’ve stopped two growth plans, one proposed for a Pittsburg oil storage facility, the other at the Valero refinery in Benicia. And now we’re opposing Phillips 66’s proposal to more than double the number of tanker ships carrying crude oil across the Bay to its refinery.

To safeguard the Bay from oil spills, Baykeeper helped pass many laws that protect the Bay from oil pipelines and trains. The laws also provide the Bay with both oil spill prevention measures and cleanup when spills occur. We partner with government agencies tasked with oil spill prevention and cleanup—to keep protection for the Bay strong. And we advocate for tougher regulations on refinery wastewater pollution.

You can be part of defending San Francisco Bay from the threats posed by local oil refinery dinosaurs. To get started, sign up for Baykeeper’s monthly e-news.